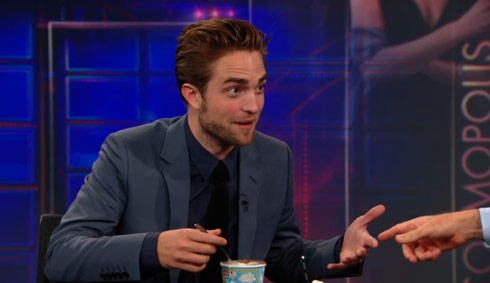 Not sure if you heard the news yet but Kristen Stewart was photographed making out with a director which could signal some troubles in her famed relationship with actor Robert Pattinson. Remember, you get your “news” here first!

Welll… Robert sat down with probably the best dude he could to acknowledge while not acknowledging the big cheating elephant in the room when he made one of his first TV appearances since the scandal broke. He rocked The Daily Show and host Jon Stewart made the best he could of all the awkwardness with the help of some Ben & Jerry’s ice cream. Jon said it was so he and Rob could be like, “Just a couple of gals talking.”

Robert joked that he wanted to hold back on the ice cream because he was going to “split his Spanx” and that he was “double-spanked.” At this point Rob started dancing around the big issue:

“My biggest problem is that I’m cheap. I didn’t hire a publicist and every awkward interview… You know actors usually get these things scripted.”

Stewart chimed in with:

“The last time I had a bad break up, Ben & Jerry got me through some of the tougher times. So I thought you and I could bond over this and talk, ‘Boy you are better off. Kick her to the curb. Whatever.'”

Then in a moment of thoughtfulness Stewart added:

“When you are young and you break up it’s powerful and it feels like the world is ending. This is the first time I’ve actually seen the world react that way. It’s insanity. So here’s my wish for you. That you get to handle your business in private, in your personal life, and I wish you all the best.”

Oh yeah – they went on to talk about that Cosmopolis film which looks pretty great.

VIDEO: Conan vs. Colbert and Stewart, a dance-off for the ages