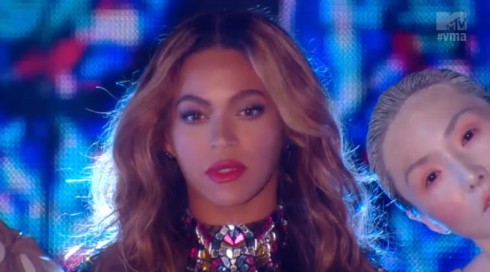 With a nearly 20-minute medley performance to close out the night, the 2014 MTV Video Music Awards Show was basically a mini-Beyonce concert/love fest.

On the actual MTV broadcast, the camera caught several sweet moments between Blue Ivy Carter and dad Jay-Z rocking out to Beyonce. (Is that a Single Ladies wave?)

Then, of course, there was the adorable moment when they joined Beyonce on stage to present her with MTV’s lifetime achievement award.

“The recipient of the Michael Jackson Vanguard Award and the greatest living entertainer, Beyonce,” Jay-Z said while giving the moonman to his tearful wife.

It was all perfect, sublime, Beyonce, etc. (Those are synonyms, right?) However, the very best moment wasn’t shown on TV — but, rather, was captured on the audience cam that was streaming online through the show: After Jay-Z watches Blue Ivy’s dance moves, he looks like the proudest dad in the world.

Obviously MTV made a big mistake by not keeping a camera on Blue Ivy for the duration of Beyonce’s performance. They made up for it by giving her the unofficial Best Kid Award.

How Beyonce lost the baby weight