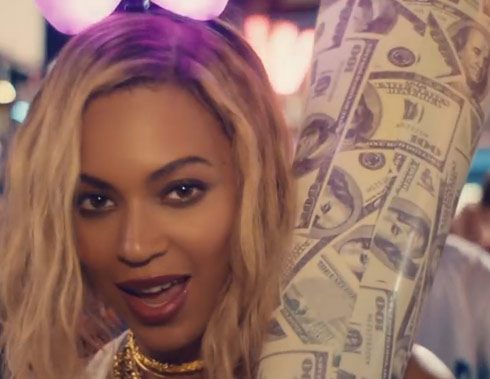 Beyoncé pulled a fast one on the world this month when she digitally dropped her self-titled new album with absolutely no prior warning. The collection of songs debuted at #1 on the Billboard charts and quickly became one of the most acclaimed releases of the year.

While praise has been fierce for Queen Bey’s bold new work, there’s also been a fair share of criticism involving the album’s lead single “XO,” in particular the sampling of audio from the 1986 space shuttle Challenger disaster that claimed the lives of all 7 crew members aboard.

The tune begins with the recording of now-retired NASA public affairs officer Steve Nesbitt saying, “Flight controllers here looking very carefully at the situation. Obviously a major malfunction,” as he tried to describe what was transpiring while the world witnessed wreckage falling on live TV after the fatal explosion.

June Scobee Rodgers, the widow of Challenger space shuttle Commander Dick Scobee, had the following to say in regards to use of the audio:

“We were disappointed to learn that an audio clip from the day we lost our heroic Challenger crew was used in the song ‘XO.’ The moment included in this song is an emotionally difficult one for the Challenger families, colleagues and friends. We have always chosen to focus not on how our loved ones were lost, but rather on how they lived and how their legacy lives on today.”

Former NASA employee Keith Cowing didn’t mince words in regards to what he felt was a device used simply to provide shocking attention for the song. He wants the sample removed and apologies provided to the families of the Challenger crew:

“This choice of historic and solemn audio is inappropriate in the extreme. The choice is little different than taking Walter Cronkite’s words to viewers announcing the death of President Kennedy or 911 calls from the World Trade Center attack and using them for shock value in a pop tune.”

Current NASA astronauts, who aren’t allowed to speak publicly on the topic, expressed private reservations about Beyoncé’s choice as well.

The singer provided an exclusive statement to ABC News this morning about the controversy:

“My heart goes out to the families of those lost in the Challenger disaster. The song ‘XO’ was recorded with the sincerest intention to help heal those who have lost loved ones and to remind us that unexpected things happen, so love and appreciate every minute that you have with those who mean the most to you. The songwriters included the audio in tribute to the unselfish work of the Challenger crew with hope that they will never be forgotten.”

Do you believe Beyoncé should remove the audio sample or that she owes any apologies?