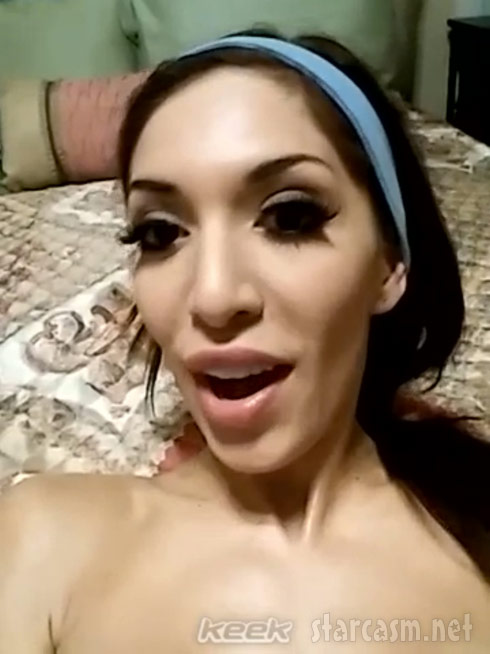 You can accuse Farrah Abraham of a lot of things, but resting on her laurels is not one of them! (Although she has done a number of other questionable things on the laurels of James Deen. Hi-yo!) Not long after apparently wrapping up her solo Couples Therapy appearance with Dr. Jenn Bermann, the Teen Momtrepreneur took off for New York City where she is currently filming some sort of project involving her daughter Sophia.

Farrah posted a keek video from her hotel room in what appears to be the Maritime Hotel in Chelsea on Tuesday and said in the clip, “I am going to be doing some funny stuff. So, look at your channels that are funny! I think we know that Comedy Central has it all.”

The next day she tweeted photos of two VIP passes to Comedy Central’s Stand Up Series with Dave Attell and added, “Some stand-up #Uncensored I’m ready for my type of #Comedy #NYC”

The Dave Attell Stand Up Series was announced in August and doesn’t appear to include sketch comedy, which might could have explained Farrah’s connection in some sort of official capacity. Here’s a description of Attell’s series from the press release:

The untitled late night stand-up series will be hosted by Attell and consist of eight half-hour episodes featuring him and his fellow comedians as never seen before: uncensored and unfiltered. The series will celebrate comics in their truest and most authentic form and will feature sets from up-and-coming talent as well as familiar faces in the comedy world as well as unscripted, interstitial moments throughout each episode.

I’m guessing whatever Farrah is doing with the network, it doesn’t really anything to do with the Dave Attell series — she probably just got VIP tickets and was in the audience. That theory seems to be backed up by a photo tweeted by Farrah Thursday night featuring her daughter Sophia having a microphone put on her by a member of a production crew: 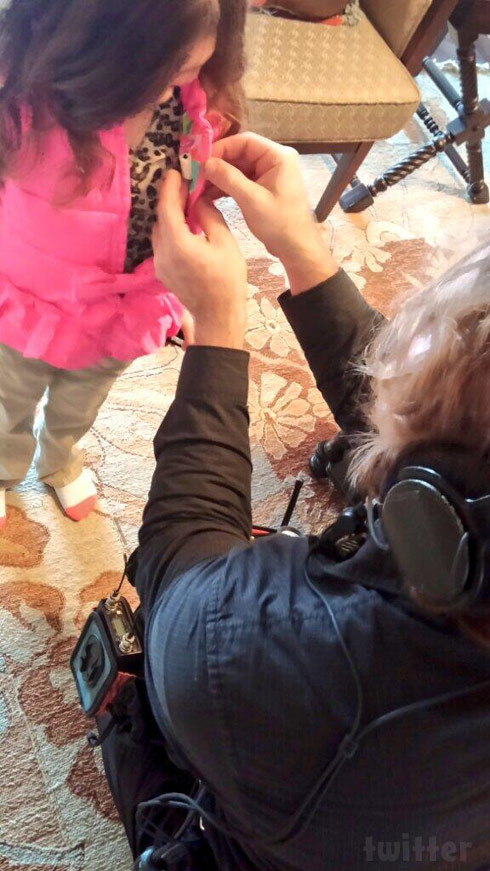 “That’s my baby wearing a mic :)” Farrah tweeted before adding the hashtags #CelebrityBaby #Star and #FilmingTV

Whatever it is that Farrah and Sophia are filming, it sure must be exhausting! At least it appears that way from this next video uploaded to keek by Farrah not long after the microphone photo in which Farrah appears to be nude (except for a headband and some rather intimidating fake eyelashes) as she talks about her and Sophia’s busy day:

“So, it’s the end of the night and Soph has been working her bum off today,” Farrah says before panning over to show Sophia face down asleep on the bed. “She passed out and I am still working, like other mommies totally get,” Farrah continues. “So, guess what we’re filming now? And I’m super-excited to show everyone, and I know a lot of our fans will love seeing Soph. And her being old enough to talk and do everything that she does is soooo precious! So I can’t wait to tell you guys more, and keep looking out.”

I’m going to guess that MTV is doing a “Where Are They Now?” catch up special with Farrah and Sophia. The network had cameras present when Amber Portwood was released from prison last month and Farrah’s co-stars Catelynn Lowell and Tyler Baltierra are filming with their old network again soon according to their adoption counselor Dawn Baker:

An exciting week ahead! MTV coming to film a "Where are they Now" with @CatelynnLowell & @TylerBaltierra & speaking at Oakland Univ! Whoot!

Catelynn also seemed to confirm that fans would be seeing her and Tyler on the small screen again soon:

Excited to show people what's going on in my life right now 🙂 it's crazy here like always lol.. But you gotta love it ♥#lovelife #beunique

If you recall, MTV aired a one-hour “Being Maci” special starring Maci Bookout earlier this year, so that would leave only Farrah without a catch-up segment. Wouldn’t it be great to find out what Farrah Abraham has been up to the past couple of years?!?