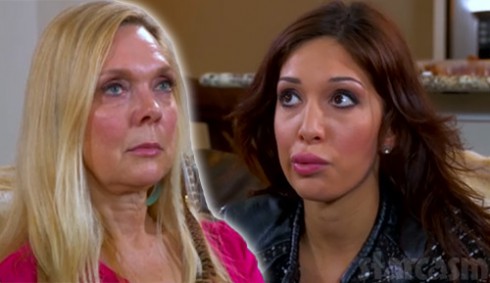 In a new clip for MTV’s Getting to Know: Teen Mom OG specials, Farrah Abraham and mom Debra Danielsen don’t have the option to forgive and forget — as they were forced to relive one of their most bitter fights with an audience of family, friends and producers. (Video at bottom… Sorry if it’s autoplaying!)

In the infamous clip from an early season of Teen Mom, Farrah and Debra get into it while driving to a car dealership. Debra didn’t like Farrah’s attitude and told her she was acting like the antichrist. Farrah felt her mom was being unfair and returned the insult. Debra, who was driving, then hit her crying daughter. (She was actually arrested at one point for choking Farrah.)

The emotional moment was clearly a low point for the mother and daughter — and it looks like time hasn’t healed all wounds.

“Mom, I’m just looking at you right now, and I’m like, ‘This is a hillbilly out of control,'” Farrah said while the old clip was playing. “Look at this s**t that I grew up with.”

Debra, who was sitting next to Farrah to watch the clip, had a different perspective. She asked, “You see nothing wrong with your behavior?”

“Oh, I’m crying and I’m upset?” Farrah responded. “You’re over there talking s**t and acting like I’m out of control.”

“You were,” Debra fired back. “I guarantee you talked that way to everybody, nobody would want to be around you.”

“I feel like beating the s**t out of you just watching that,” Farrah said.

The producers and Farrah’s dad tried to establish some peace, but Farrah was visibly upset by everything getting dragged up again. Making the situation even more awkward, a few friends were sitting by uncomfortably…

Farrah’s full Getting To Know special airs on MTV this Sunday at 3/2c and again at 11/10c.

Farrah Abraham charged in hotel assault, faces up to 18 months in jail