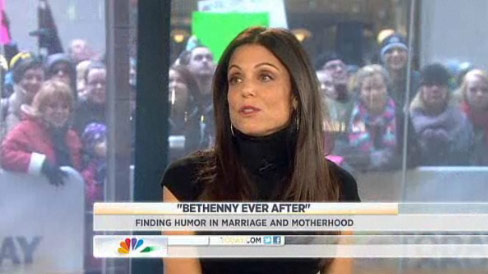 Bethenny Frankel has grown an empire by telling it like it is. Her straightforward demeanor hasn’t always set well with everyone but in this vein the reality star got emotional as she revealed to Today that she recently suffered a miscarriage.

She was on Today to do what Bethenny does and promote something she makes money off of, which in this particular instance happened to be the upcoming 3rd season of her show Bethenny Ever After. The interviewer, Savannah Guthrie, asked if she had considered having another child to join her 21-month-old daughter Bryn and she said:

“It’s a very personal question. We [she and husband Jason Hoppy] were pregnant with a second baby, and at eight weeks, I miscarried.”

While Frankel obviously felt heartbroken about what happened, she expressed deep sympathy for women that suffer from infertility. Frankel added:

“Thinking about women who can’t even have their first baby … I’m really lucky. Until you become a woman, you don’t know the things that come with it. The window is closing, and it’s something I’m dealing with.”

She did clarify that the miscarriage would not be a part of this season’s story line as it happened quite recently.

Perhaps some things are better left off reality TV. As for her comments on the cobwebs figuratively forming on Jason’s johnson, well, that absolutely should be on the show.