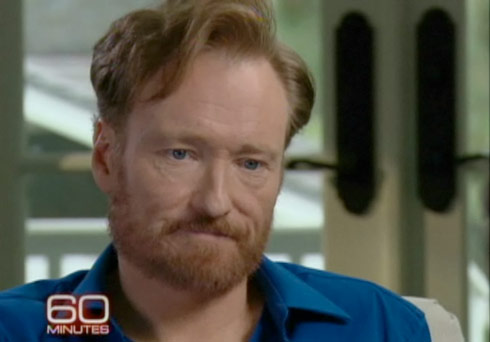 60 Minutes has released a preview clip of Steve Kroft’s interview with Conan O’Brien where the late night talk show host and comedian talks openly for the first time about his acrimonious departure from NBC and The Tonight Show.

Here’s the full Q&A transcript from the clip:

Kroft: You wouldn’t have come back on The Tonight Show?

O’Brien: If I had surrendered The Tonight Show and handed it over to someone publicly and wished them well and then I don’t, would not of come back and cut (?) those six months later. But that’s me, you know? Everyone’s got their own, you know, way of doing things.

Kroft: If NBC had handled this differently, if it had been Jeff Zucker, the president of the network, if he brought you in there at the same time as Jay or before Jay and said, “Look. We’ve got a big problem here, and we’ve got to figure out a way to resolve it.” Would that have made a difference?

O’Brien: It just got to a point where I thought, “I um, I think this relationship is going to be toxic and maybe we just need to go our separate ways.” That’s really how it felt to me. I put everything into what I do and when it started to get toxic and I started to feel that I’m not sure these people even really want me here. Let’s just, let’s just – I can’t do it.

The full interview airs on 60 Minutes on CBS Sunday May 2 at 7 pm ET/PT.