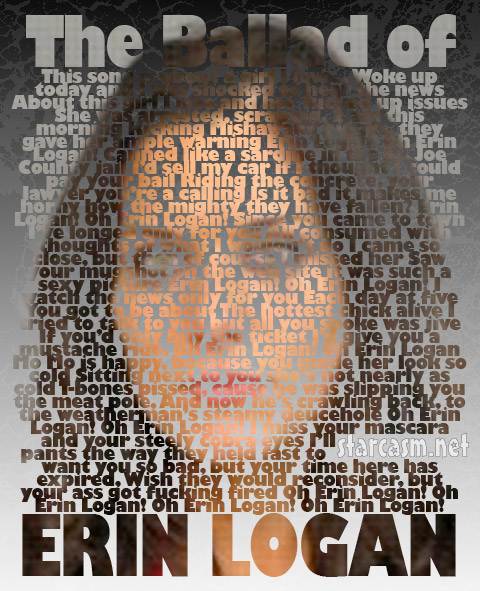 UPDATE June 16, 2010: This case was dismissed June 2, 2010, and no charges were ever filed. Erin is brushing herself off after being abruptly fired from WNDU, and will be teaching at the college level this fall. She’s also landed another broadcasting gig.

In the wee hours of the morning on April 15th in Mishawaka, Indiana news anchor Erin Logan got into a bit of a scuffle with Notre Dame alum and former NFL footballer Chris Zorich. The inebriated Logan was riding home in a police car when she got a little irate and allegedly threatened one of the cops with a high-heeled shoe, which led to her arrest for being drunk, disorderly and resisting arrest. She was then taken to jail where she registered a .11 blood alcohol level.

Though she had not been officially charged with anything, within hours she was fired from WDNU, the South Bend television station where she was employed. The station published a brief statement about her termination with her mugshot and deleted it shortly thereafter. (You can see a screen capture of the story, her mugshot and the first page of reader comments – also deleted – HERE) 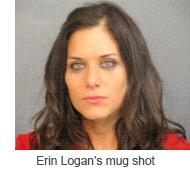 The hasty decision to fire Erin Logan immediately drew a lot of outrage from residents in the South Bend viewing area, including the campus of Notre Dame University. Fighting Irish message boards were lit up with sympathetic commenters and Erin Logan supporters started Facebook fan pages asking WNDU to reconsider their hasty decision.

Also affected by the firing was long-time Erin Logan admirer Billy “Bang” Jones, who had once mistakenly expressed his admiration for the attractive Ms. Logan in front of his girlfriend, who called him shortly after her firing was announced to rub it in his face. (Needless to say, she probably wasn’t one of the folks who started a Facebook Fan Page.)

Billy was in the middle of a recording session at the time with his 2-Liter Bomb bandmates Drex and Kemo Bobby and as soon as Billy hung up the phone after talking with his girlfriend, he told Drex, “I got the next song.”

“The next song” turned out to be “The Ballad of Erin Logan” – a punk freestyle tune in the folk tradition of Woody Guthrie and Bob Dylan extolling the injustice of WNDU’s termination of Erin Logan as well as describing in detail just how mighty fine she is.

I ran across the song on the band’s MySpace page and after contacting them, lead singer Billy “Bang” Jones (we’ll just call him “Bang” from here on) agreed to sit down with me and talk a bit about the tune and his band, 2-Liter Bomb.

First things first, here is the song in question set to a slide show of images from the band, including Erin’s now-infamous mugshot: (I should warn you that there are a few instances of adult language in the song, which is understandable given the outrageous treatment Erin received and how d@mn sexy she is!)

Starcasm [S]: The obvious question is: what inspired you to write “The Ballad of Erin Logan?”

Bang [B]: My ex-girlfriend always gave me a hard time for saying once that Erin Logan was sexy. So when she got fired, my ex called me to rub it in my face. I just so happened to be in a recording session. Drex had been playing through some old tunes we never wrote words for. When I hung up the phone I looked at him and said, I got the next song.

I took a smoke break and wrote the six verses in five minutes.

We laid it down on tape a few minutes later.

Then a few days later we did the final version with Kemo Bobby and full instruments.

S: So what’s your theory on the quick firing of Erin and then the deafening silence since from everyone involved?

B: Fact is, Clear Channel came in and bought WNDU a few years back and started inserting their hot chicks from around the country. Erin was one of maybe a dozen they sent to our market. But the brass at the station is still loyal to the old anchors left around after the Clear Channel take over. They were just waiting for her to fail!

S: “The Ballad of Erin Logan” seems to be in the Woody Guthrie/Bob Dylan folk vein, yet it says on the band’s MySpace page that billions of people hate Bob Dylan. Do you hate Bob Dylan? 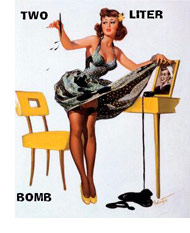 B: Love Bob Dylan…! I was just talking sh!t.

S: I’m sure you guys don’t just record grunge metal folk anthems about unfairly treated sexy news anchors – what else is in the 2-Liter Bomb oeuvre?

B: We just put out the 2nd song from our 5-song ep called for now “The Hard Encore” to be released in early June. The 2nd song is called “L Store Girl.” Check it out!

S: What’s the recording process like for 2-Liter Bomb?

B: Lotta pills and lotta pop (that’s Midwest talk for soda) – Kemo likes beer- I try to stay away from anything not poisonous. We just grip it and rip it – no regrets.

S: Where can people go to download “The Ballad of Erin Logan” so they can blast it out of their cars at the “Rehire Erin” rallies?

B: Right now we have a MySpace page as our base of operations, kinda like the dive bar of social networking sites. Also there’s a little slide show video on Youtube in lieu of a video with the Erin Logan song.

On a side note, a friend of a friend actually knows Erin Logan, tells me she has heard the tune, and loves it!

S: After this song tops out at Number One, what’s next for the band? What are you doing to keep from being just another “one hit wonder?”

B: A famous punk once told me, of you want to stay famous, just keep p!ss!ng people off.

Well there you go! I’d like to say thanks to Bang for taking time out from pillin’ poppin’ and playin’ to talk to talk with me. Be sure to check out 2-Liter Bomb’s MySpace page as well as their brand new Facebook page, and you can also hear them being played on WRBR 103.9. 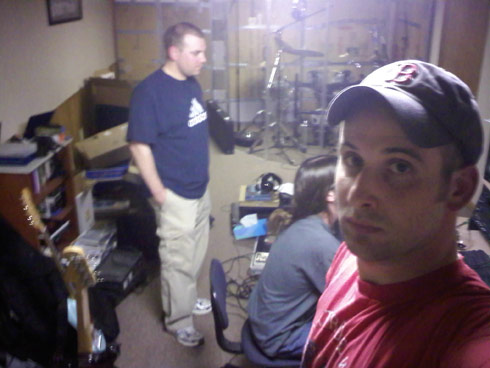 In case you wanted to know a little bit more about the band, here’s the VH-1 “Behind the Music in 15 Seconds” version:

Eric Moore (Drex) has been playing drums since he was 3, and everything else since he was about 8. He first hooked up musically with Bob Frame (Kemo Bobby) our bass player and engineer when they were 13. The first band was called “The Streakers” and since then they have come together on several projects.

Billy (Bang) Jones (Dr. Jones/Wild Bill/Billy the Butcher) – a former hollywood screen writer, bouncer, bar tender, and ranch hand, also poet and musician – having just returned from California for a family emergency, first met Drex while working on “The 86” a single album punk/ska/reggae effort headed up by nationally popular musician known as “Knowledgeborn07.” After its completion Drex and Bang set off to create a new style of music they called punk freestyle, where punk music was played and lyrics were created on the spot during the music. They called the band 2-liter Bomb. After a few recording sessions that yielded many dozens of original songs, Drex suggested bringing in a third member, Kemo Bobby. And bam, the band was complete!

For those wanting to sing along here are the complete lyrics for “The Ballad of Erin Logan:”

(This song is fictitious, any and all similarities to actual persons living or dead, past, present, or future is completely coincidental)

The Ballad of Erin Logan

This song is about a girl I love…

Woke up today and I was shocked to hear the news
About this girl I love and her f***ed up issues
She was arrested, scraping, 2 am this morning
Kicking Mishawaka piggys, they gave her ample warning

Since you came to town I’ve longed only for you
All consumed with thoughts of what I wouldn’t do
I came so close, but then of course I missed her
Saw your mugshot on the web site it was such a sexy picture

I watch the news only for you Each day at five
You got to be about The hottest chick alive
I tried to talk to you but all you spoke was jive
If you’d only buy the ticket I’d give you a mustache ride.

Mo Mo is happy, because you made her look so cold
Sitting next to you she’s not nearly as cold
T-bones p!ssed, cause he was slipping you the meat pole,
And now he’s crawling back, to the weatherman’s steamy deucehole

I miss your mascara and your steely cobra eyes
I’ll miss your pants the way they held fast to your thighs
I want you so bad, but your time her has expired,
Wish they would reconsider, but your a$$ got f***ing fired

PHOTOS Sandra Bullock wears a bag on her head