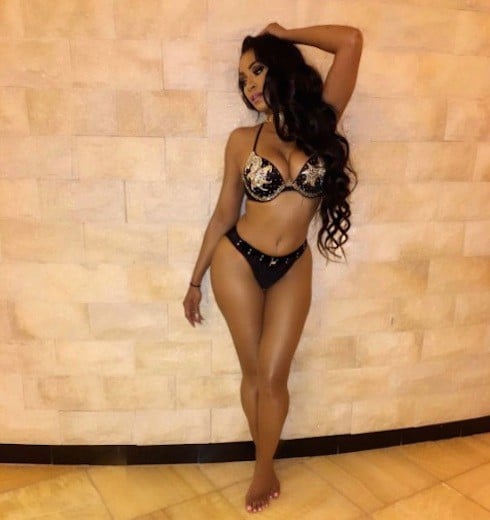 Ceaser and Karlie Redd have an interesting relationship. To the surprise of many, the Black Ink Crew star went public with the Love & Hip Hop Atlanta mainstay at the red carpet opening of his new Atlanta tattoo parlor a couple of months ago. (And by “many” we mostly mean “everyone who’d been led by LHHATL to believe that Karlie and Young Joc were dating again.)

Then, they announced that they are practicing celibacy, about which Karlie sounded excited and Ceaser sounded like someone who drank milk from the carton without checking the date first. And most recently, Karlie topped herself for pure “WTF” value by announcing, apropos of nothing in a radio interview, that she’s “gonna be pregnant soon.” She didn’t explain how she’d reconcile that with the celibacy angle, but the implication was that Ceaser would father her child.

But now we’ve caught up to the point in Black Ink Crew‘s current season where the cameras started capturing Ceaser and Karlie Redd’s time together, and, well…it’s not the least chemistry you’ve ever seen on screen. If you ever suspected that the pair’s relationship was little more than a front for some sort of ill-defined Black Ink–LHHATL crossover, you now have plenty of evidence to support your theory:

Right off the bat, Ceaser’s reaction to Karlie’s “ploy” is hilarious. He knew damn well that he’d be filming at a spa that day, but he really does look both confused and upset to be actually at a spa instead of a club or a tattoo parlor or a Falcons game or something. And on that note, “First you relax, then you relate…to the people of Atlanta” is exactly the kind of thing your girlfriend (or the woman you aren’t sleeping with but both of you know that you really wish you were) tells you after she’s gotten you to go to the mall with her under some flimsy pretense. Ceaser is not coming across like someone ready to dominate a new city.

Plus, he still won’t get into the water with Karlie despite her innuendo-y invitation and her disrobing. *And* Ceaser doesn’t take his shirt off! Yes it’s early in their relationship, but he’s acting more like a kid with a crush on his babysitter than Karlie’s peer.

Anyway. These two are hardly the first couple to get together for strictly business reasons. Hell–they aren’t even the first or the second couple to get called out for doing that today.

You can see them for yourself when Black Ink Crew‘s Season 5 finale airs tonight at 8 on VH1.

Awkward Photo of the Week: Jessica Simpson sprawled out on her carpet