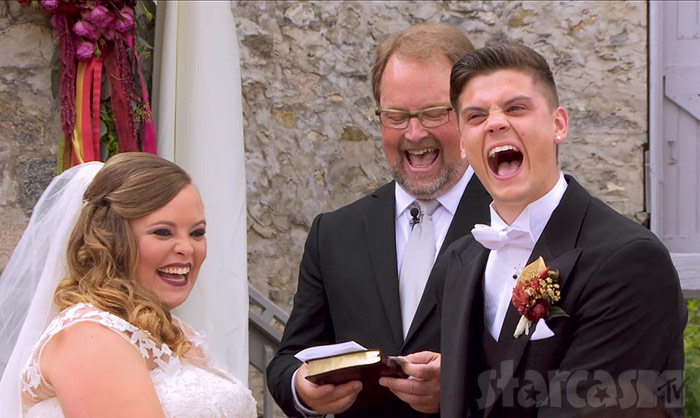 This week’s special hour-and-a-half episode of Teen Mom OG featured the highly anticipated wedding of Catelynn Lowell and Tyler Baltierra, the only couple on the show to remain together throughout its six-and-a-half-year run (including 16 & Pregnant).

The episode did not disappoint as Catelynn and Tyler’s wedding was a beautiful ceremony with Castle Farms in Charlevoix, Michigan serving as the fairy tale backdrop. The entire event was an emotionally charged, but completely joyful and celebratory, affair that is a testament to the effect that love can have, not only on the two people in the relationship, but on their friends and family (and millions of television viewers) as well. 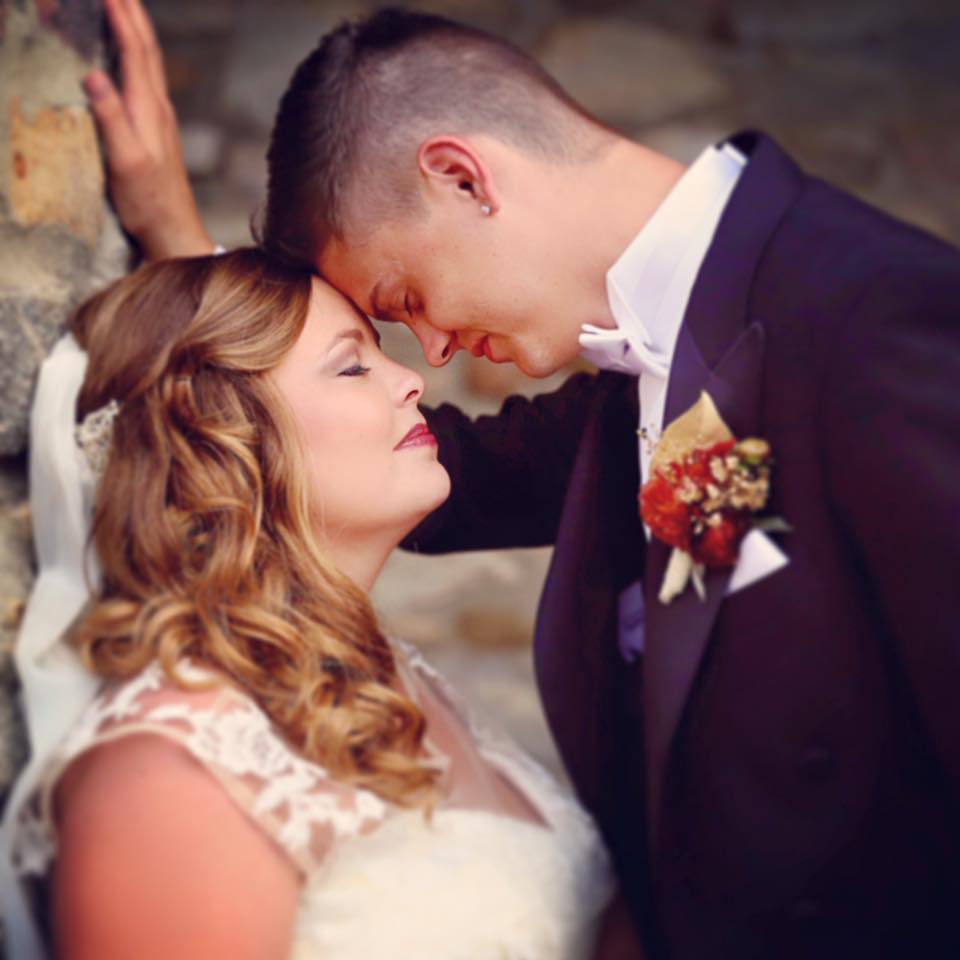 If you are a skeptic looking for proof of the power of love, you need to look no further than those in attendance at Catelynn and Tyler’s wedding. There’s an emotional and completely transformed Butch Baltierra, who thought he was going to miss yet another important day in his son’s life before getting an early release from prison. (Is there anyone in reality TV that had a more positive transformation in 2015 than Butch Baltierra? I can’t think of one.)

Catelynn’s mom April is there with her new husband after transforming her own life as well. (I know fans of the show remember all of those horrific scenes from 16 & Pregnant and the first seasons of Teen Mom in which April and Butch were so terrible. Amazingly, Catelynn and Tyler were able to break so many of those cycles, and they dragged both Butch and April along! It’s still so hard to believe.)

Brandon and Teresa are also in attendance with Catelynn and Tyler’s birth daughter Carly — a true testament to the absolute rightness of the couple’s decision to place Carly for adoption. Here are Tyler and Carly (and Brandon and Teresa and Catelynn) dancing together:

Watching all of these people that have been so positively affected by Catelynn and Tyler’s strength and perseverance celebrating their triumphant union was almost too much. Almost.

And speaking of almost too much, another moment from the wedding that everyone is talking about is Tyler Baltierra’s emotional reading of his wedding vows. Tyler has always worn his heart on his sleeve, even when the TV cameras are rolling (his proposal at the restaurant still might hold my all-time record for most tears produced while watching a reality show), and his words to Catelynn on the altar had EVERYONE in tears. (Yes, Taylor McKinney, I know there was some extra eye moisture behind those shades!) 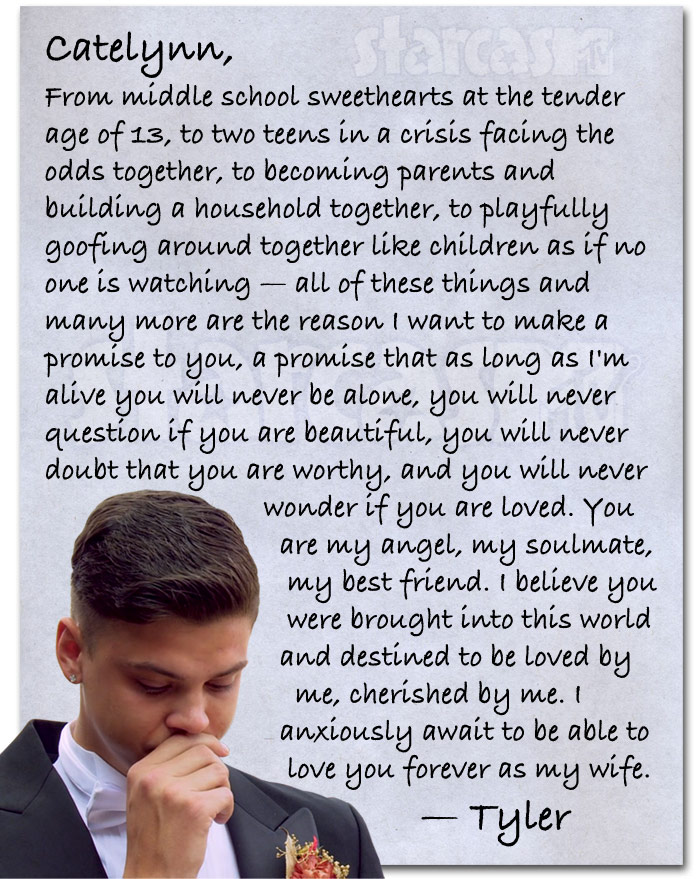 After his words went viral, Tyler humbly shared his surprise on Twitter:

I guess my vows are going "viral" I'm surprised this is blowing up so much I should copyright & sell to Hallmark haha ??? #BaltierraWedding

Apparently, we didn’t even get to see all of what Tyler had written!

That wasn't even all of them. I said more but they were kind of long so MTV didn't have all night haha https://t.co/gZbih9LR5H

After the episode aired, MTV shared an “Extended Cut” video clip of the wedding vows scene, and we have that for you here:

After Tyler read his vows, Catelynn gathered herself before reading hers. “I can’t top his,” she humorously announced to the crowd. But this wasn’t a competition, and Catelynn’s words of love and commitment to Tyler keeps those joyful tears pouring out: 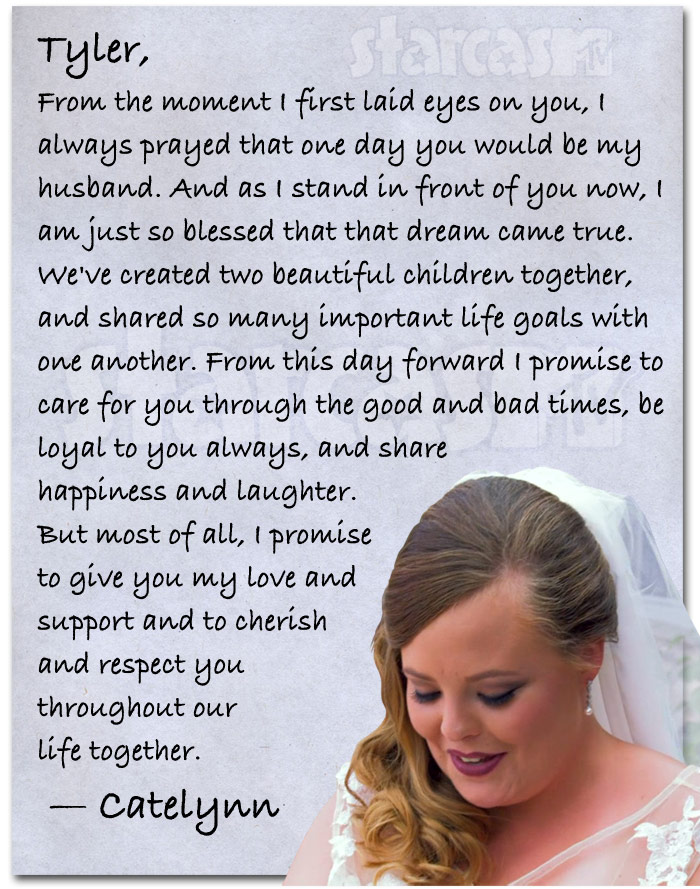 I want to give a HUGE congratulations to Tyler and Catelynn on their marriage, and on their daughter Nova, and on their transformed family, and on all of the other positive things they have manifested in their lives through love, commitment, and hard work. People complain all the time about the subject matter of reality TV, and you don’t have to look any further than the rest of the Teen Mom OG episode this week, but Catelynn and Tyler stand as a testament to the fact that positive human stories with honesty, sincerity, and joy are also something that people want to see.