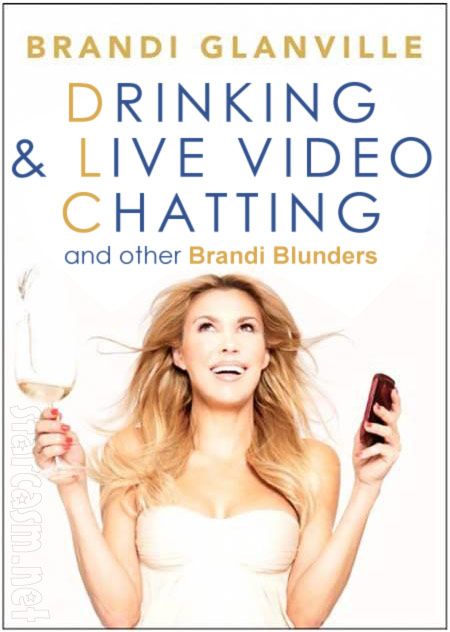 The Real Housewives of Beverly Hills‘ Brandi Glanville participated in a live 30-minute Google+ Hangout with OK! earlier this evening (full video below) and she was her usual candid self, which of course means there is sooooooo much to talk about that I don’t even know where to begin!

I suppose I’ll start with her comments about Faye Resnick, since their confrontation on this week’s episode is still fresh on everyone’s minds.

In case you missed it, Brandi and Yolanda Foster were grilling Marisa Zanuck over comments she made the night before about a Brandi “hall pass” text message. Faye Resnick inserted herself into the conversation, and Yolanda and Brandi let her know she was not welcome. The issue of who was being ladylike and who wasn’t came up, with Faye telling Brandi at one point, “No matter how many Chanels you borrow you will never be a lady.”

The altercation angered a number of viewers (which is something Faye seems to be very good at), resulting in a backlash online that apparently included death threats!

Brandi was asked about Faye’s actions. “That’s just her personality,” Brandi says. “I know that she was getting death threats and all this craziness and I think that’s ridiculous, and I wish people would stop with that, because, you know, it’s a show, and no one’s perfect. But, you know, Faye is just Faye.”

“I’m not defending her by any means,” Brandi added, before saying that it’s “a little aggressive” for Faye to be receiving death threats. “She’s a bitch. She doesn’t need to die.”

Brandi then goes on to talk about the concept of being a lady, and says she once helped a guy who needed a jump start and that although that wasn’t “ladylike,” it was the right thing to do. “Do I say the F word?” she asks rhetorically. “Yes. Do I dress a little sl*tty? Maybe. But I know I do the right thing … and I know I’m a good person.” She then adds humbly, “But I also know that I f**k up — but I think that everyone is allowed to. You can still be a ‘lady.’ Listen, if you buy your clothes at Walmart you can still be a lady Faye! It’s ridiculous.”

Brandi was also asked about what we can expect at The Real Housewives of Beverly Hills Season 3 Reunion, which was the first time she showed a little restraint, saying that she had been specifically instructed not to give anything away. Even so, she did reveal that her pal Yolanda Foster had a rough first time. 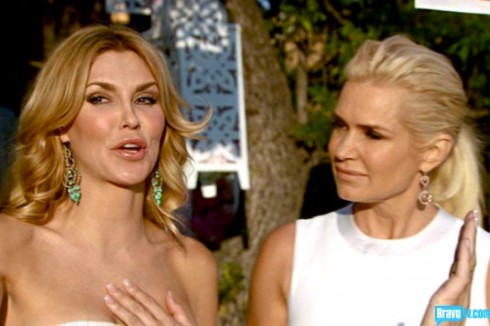 “The girls really have a go at Yolanda,” Brandi says. She explains that Yolanda is still dealing with the Lyme disease and has been in Florida at a clinic trying to get better. “Her brain still wasn’t functioning when she shot the reunion,” Brandi says. “She couldn’t remember what she had just said, and she couldn’t remember a lot of things. And they were going at her, and I just stepped in and I was, like, ‘Hold up! … Leave her the f**k alone,’ and it got a little ugly.”

So what about Brandi’s personal life? Is she single? “Define single,” Brandi says, laughing. “I’m dating. And I’m dating one person more than the others. But there are others. There you go. And now he knows it.” (That reminds me of that classic Mitch Hedberg line, “I don’t have a girlfriend, I just know a girl who would get really mad if she heard me say that.”)

“I don’t have the time for a boyfriend right now,” Brandi continues. “I have two little kids, half the time, who are my life, and right now I’m looking for a house since our lease is up and we have to move, and then I’m writing the book, and then I have Bravo blogs, and we’re doing all of this other work, and it’s amazing, but I don’t have time to invest into a man, so I’m taking this year to invest in our future — me and the kids. I’ll date, and, you know, have fun, but that’s all that’s happening right now.”

Later Brandi was asked what reaction or misconception from fans most upset her, and she first mentioned the backhanded compliment, “Oh, so you’re actually smart!” before moving on to people assuming she is a sl*t. “I’m not a sl*t,” Brandi says. “I’m really not. I want to be! I’m kidding! I don’t sleep around. I’m dating all these guys, I’m not sleeping with anyone. If you sleep with someone then I think you should be in a committed relationship with that person.”

So I guess she was in a “committed relationship” with Gerard Butler? Then he should feel really bad about not remembering Brandi’s name!

Brandi talked a lot about the success of her book Drinking and Tweeting: And Other Brandi Blunders, and revealed that she is already working on a second book! “We are negotiating a deal for book number two right now and I’ve been writing already,” she says. “We’re working out the ‘numbers’ right now.”

So what is Brandi Glanville’s second book going to be about? “I’ve been single for four years and I have friends that are gay, straight, single, 40, 30, 50 — and I kind of want to write, you know, Drinking, and Tweeting, and Relationships.”

Brandi on relationships? That’s bound to be entertaining! “The stuff that I’ve already written — I think it’s pretty funny, and then I’ve called all my girlfriends saying ‘I need your dating horror stories, and I need to know what you would do differently.’ So it’s going to be a lot of my friends helping me with this one, but it’s going to be, like, dating in 2013, and relationships, and how the game has changed, especially with, you know, dating online.”

“The dating world, relationships, even marriage has changed, so it’s going to be about that,” she says.