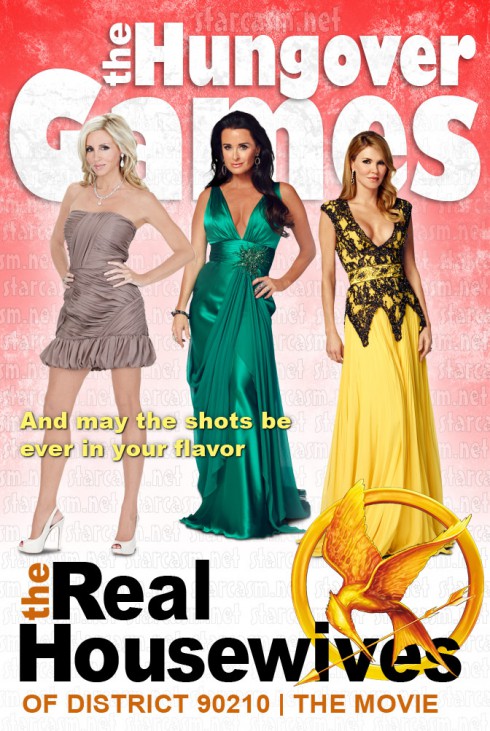 We were the first to break the story that The Real Housewives of Beverly Hills cast mates Kyle Richards and Brandi Glanville would be starring in a movie together, but we had no idea that Camille Grammer would be joining them! Brandi Glanville revealed in her OK! live Google+ Hangout last night (watch the full video here) that the three of them will be appearing in The Hungover Games, a spoof mashing up The Hangover and The Hunger Games.

It appears that Brandi isn’t supposed to be telling us anything, but of course that doesn’t stop her! “We did a movie called, I don’t even think I’m supposed to tell you guys this, but I don’t know… I’ll tell you. It’s called The Hungover Games, so it’s a spoof on The Hunger Games and The Hungover, Hangover! The Hungover Games. And we were ‘The Housewives Tribe,’ Camille, Kyle and myself.”

And apparently the producers did a pretty good job on casting the male leads in the film. “The guys that they got to do the movie look exactly like the guys in The Hangover! … They had us pretend fight, and Kyle started to really choke me, so I pulled her hair.” This is beginning to sound like a pretty normal Housewives episode. All I can say is that the Bradley Cooper lookalike had better look out! (Just remember to tell him your name Brandi!)

So when is The Hungover Games coming out? “I think they said it’s Septemberish,” Brandi said. (You can see Brandi’s entire video chat with OK! here! As you can probably imagine, it’s chock full of Brandi goodness, including her reaction to Faye Resnick receiving death threats, whether or not she’s dating anyone, what her second book is going to be about, and a little bit of what we can expect during The Real Housewives of Beverly Hills Season 3 Reunion!)

I just hope they have “The Teen Mom Tribe” and “The Honey Boo Boo Tribe” too!

UPDATE – Perhaps the movie wasn’t so hush hush after all because Kyle and Camille have been tweeting photos from the set, including this one with Stephen King’s Carrie! 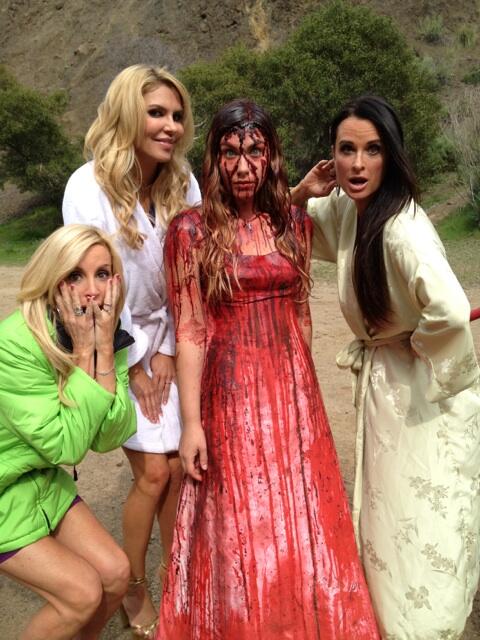 What’s interesting is that it appears writer/director/producer Josh Stolberg is involved with the project, who wrote one of my favorite silly films of the last decade, Pirhana 3DD! (That bodes well.) Here are some more photos from the set of The Hungover Games, including one of Kyle and Jamie Kennedy — so there’s another name attached to the project. 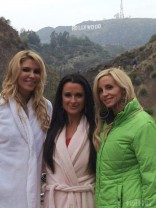 For a sneak peek of what the film probably won’t look like, here’s a brief Funny or Die clip with the same title (“The Hungover Games”) from 2012:

The Hungover Games from Ashley Hinshaw
Tweet Pin It