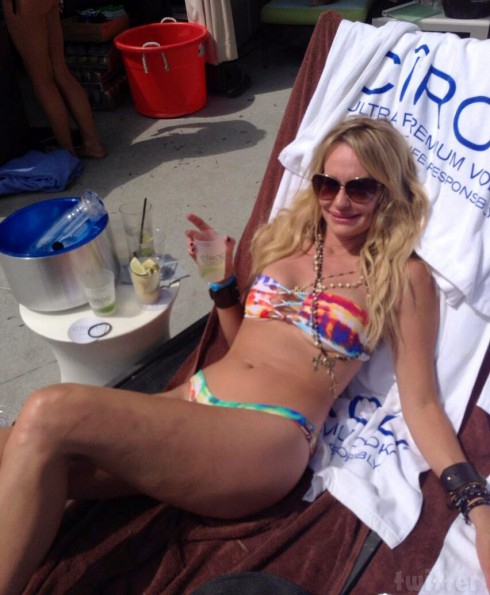 Monday was The Real Housewives of Beverly Hills star Taylor Armstrong’s 42nd birthday and she celebrated a day early on Sunday by lounging poolside in a thong bikini with her current boyfriend John Bluher. Taylor shared the photo above in her revealing two-piece swimsuit along with the tweet, “Celebrating my bday poolside w my love. @ciroc summer fun cocktails -coconut ciroc and oj.”

In addition to John, coconut Ciroc and orange Juice, Taylor’s daughter Kennedy was there along with Kyle Richards’ youngest daughter Portia Umansky. The two BH darlings posed for this next photo together, which Taylor captioned with the question, “How cute are these girls?” 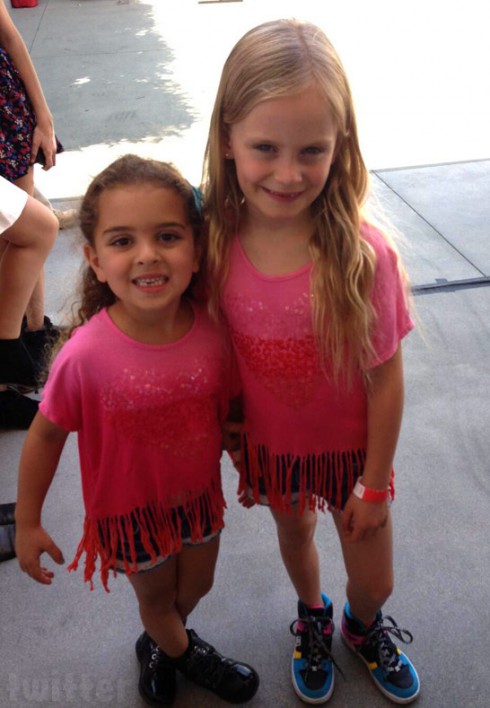 The pool party continued on Monday, Taylor’s actual birthday, and she spoke with Hollywood Life about her birthday plans. “We’re very happy and he’s a great guy,” Taylor says about her man John. “We just wanted to ring in my birthday together, something relaxing and that’s what we did. We spent Monday out by the pool, relaxing and soaking up the sun.”

And in case you wanted to see more photos of Taylor Armstrong (Armthong?) rocking her San Lorenzo “Tie Dye Explosion” reversible braided thong bikini (yes, we do our research!) and heating up the pool with some sizzling PDA, check out this Youtube video slideshow:

Prior to hosting her own relaxed pool party, Taylor had another pre-birthday celebration at the restaurant Aventine Hollywood with a group of friends Friday night. Pal Dwight Coates tweeted this next group photo from Aventine that includes Taylor and beau John Bluher along with the caption, “Perfect nights are celebrating BFF gorgeous @TaylorArmstrong being another year fabulous! Xx #repeattonight” 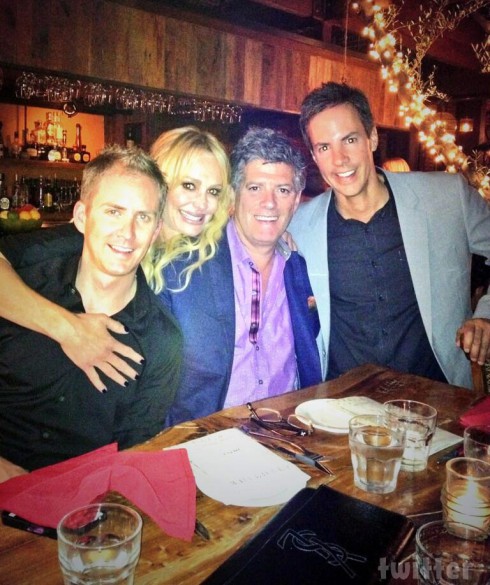 Speaking of Taylor’s dinner at Aventine, TMZ caught Taylor and John heading into the restaurant Friday night and asked her about Brandi Glanville’s “stolen” pooch, and Taylor replied by stating, “I don’t know what to think about it. It’s probably another publicity stunt by Brandi Glanville, frankly.” Here’s the clip:

The night before Brandi tweeted that her brown Chihuahua Chica was missing. “My dog Chica is lost please help! Call me,” Brandi wrote. “I will give anyone who finds my dog chica in Bel air, La, Encino area 10 thousand dollars. Please please. She has a collar call me!”

Brandi called in to “TMZ Live” on Friday and hysterically told them the dog — and nothing else — had been stolen. (Brandi’s assistant initially informed her of the bad news, telling her someone broke into Brandi’s house and took the dog.) The whole thing seemed a bit suspicious, and Brandi addressed that by saying, “I don’t wanna blame my assistant. I don’t know if she lost them and is making up the story and only found one … But I have to believe what she tells me because I don’t know.” Brandi reportedly later fired the assistant in question.

Rumor Fix reached out to Brandi to get her reaction to Taylor’s rather insensitive comments, and of course Brandi was happy to give them one. “[Taylor said that] for attention,” Brandi counters. “She wasn’t asked back to the show and she will do anything to try and create a way back in as a full time person. I’m heart broken and freaked out and I don’t care about her. That’s how she thinks, she is a bad person.”

As far as Chica goes, the dog still remains missing. But until she comes back, Brandi has gotten a stand in!

We have a new family member until Chica comes back to us. His name is Chico twitter.com/BrandiGlanvill…