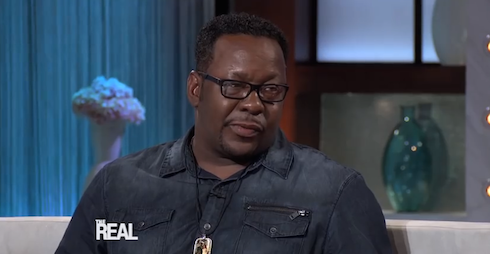 “I might walk back there,” Brown said, gesturing toward the backstage of the set, “and start crying.”

Brown didn’t display bitterness in the interview, but did show intense regret. Speaking frankly about the Bobbi Kristina death, Brown said “If I could’ve been there two days before…it wouldn’t have gone down like that.”

“What’s your fondest memory [of Bobbi Kristina],” asks one of the hosts.

Brown’s answer is simple: “Her smile.”

Brown was also able to joke about the reunion that the Bobbi Kristina death brought about–namely, that of his daughter and his ex-wife Whitney Houston. “[Whitney] was not comfortable by herself, I guess,” said Brown, to laughter from The Real‘s hostesses. “he just called my daughter with her….I’m pretty sure her mother was…had a part with like, ‘Come on, let’s get her up here.’”

One topic Brown did not discuss was the Bobbi Kristina estate’s $10 million civil lawsuit against alleged domestic abuser Nick Gordon. Gordon was not a topic despite recent developments in the ongoing criminal investigation into the Bobbi Kristina death–Gordon’s legal team recently filed papers asking an Atlanta judge to have the entire case thrown out, but, in those papers, Gordon also admitted for the first time to the huge fight that he and Bobbi Kristina had the night before she was found face-down in her bathtub.

Hugh Hefner has passed away at age 91