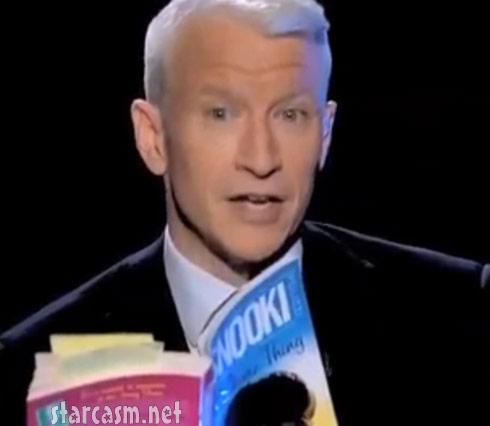 Anderson Cooper has a history with Jersey Shore’s Snooki and it isn’t pretty. He’s taken advantage of the reality star by poking fun of her novel A Shore Thing. While Cooper has postured a position of holier than thou he has now conceded to Nicole Polizzi’s literary skills after discovering that she has signed a second book deal which, as he points out, is one more than him.

In the following clip from Cooper’s little known show AC360 he makes his sincere mea culpa and finishes it off by performing a reading from the novel he used to look down upon. He states in part that:

“Now I’ve made fun of Snooki’s writing before this is true but now that she has another book coming I think it’s time to reassess. It’s hard to tell which is my favorite chapter in her first book A Shore Thing. There’s “Karma is a bitch, bitch,” Make Me Beg” or perhaps “Vin Diesel is hotter than Jesus.” Joan Didion told me that was one of her favorite chapters. So what lead Snooki from the jacuzzi of shame to the world of Alice Walker and Salman Rushdie? Talent. Raw, tanned talent.”

The Situation spotted on a date with new girlfriend, Paula Pickard!