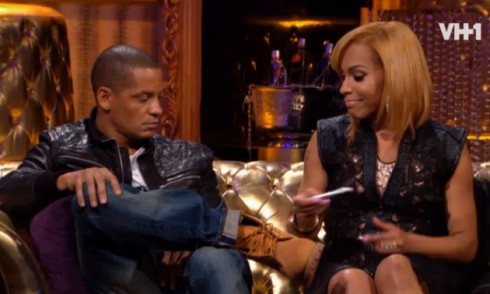 After weeks of rumors that she is expecting Peter Gunz’s baby, Amina Buddafly confirmed the reports in dramatic fashion on the Love & Hip-Hop Reunion Special.

“Everyone who watched the season knows that I like to pull things out of my bra and slam them on tables,” Amina said, reaching inside her dress, grabbing a pregnancy test and tossing it to Peter. “Unlike your baby’s mother, I did not take the Plan B… I’m pregnant.”

Possibly because of the bombshell and possibly because he just had a peed upon stick tossed on his lap, Peter stormed off the stage. He eventually agreed to return, but only wanted to speak with his ex, Tara Wallace — which meant Amina had to leave the stage. Lovely way to treat the woman carrying your baby.

Forever caught in the middle of the awkward love triangle, Tara told Amina she felt bad that Peter reacted so poorly to the pregnancy announcement.

Amina later defended the way she made the announcement, saying she only found out she was with child two days before the reunion and didn’t want Peter to make her keep it a secret. She added the pregnancy reinforced her belief that she “absolutely cannot stay” with Peter.

“The moment that I decided that I absolutely cannot stay with him is when I found out that this is happening,” Amina said. “It’s totally messed up for me to be pregnant and by myself and that reaction from him just now proved to me what it’s gonna be with him and I.”

Considering the reunion special was filmed in December, Amina’s probably 10-14 weeks along at this point.