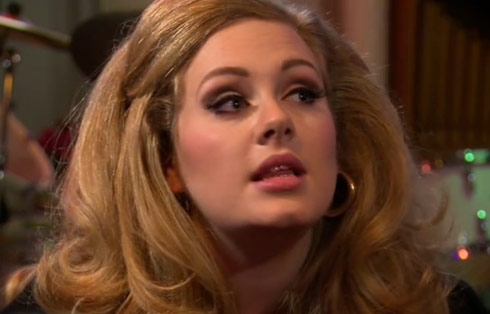 Adele is ready to return to total domination Sunday night as she’s slated as the opening performer for the Grammys. In a preview clip for a pre-show appearance to air on 60 Minutes the “Someone Like You” singer let it loose for Anderson Cooper with an a capella version of her biggest hit “Rolling In the Deep.”

So, has the much loved performer made it all the way back from vocal cord surgery for a hemorrhaged polyp that forced her to cancel an entire U.S. tour? I’ll let you be the judge:

That’s just plain showing off girl! The chanteuse recently had to deal with the vampirish designer Karl Lagerfeld calling her, “a little too fat.” She responded to People with a smack down that was nearly as deadly as the vocals from that clip. She said:

“I’ve never wanted to look like models on the cover of magazines. I represent the majority of women, and I’m very proud of that.”

Adele’s 60 Minutes interview will air Sunday night at 7 EST followed up by the Grammys at 8 EST on CBS. Adele is nominated for 6 awards herself including Album of the Year, Record of the Year, and Song of the Year. While I daydream of being cozied up next to a baby grand while Adele sings to me I’ll let you in on a little secret – she’s gonna win for Record and Song of the Year with “Rolling.”