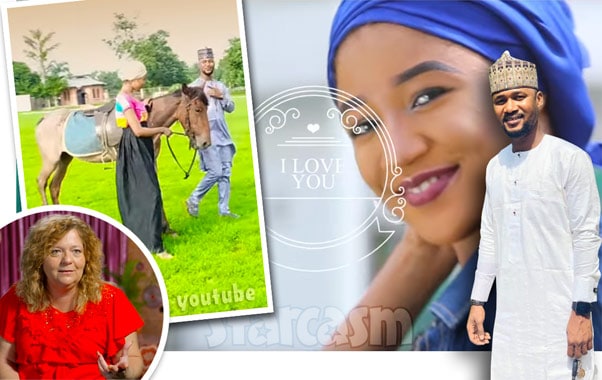 Someone needs to warn Nigeria that the Category 5 storm known as Hurricane Baby Girl Lisa is headed their way! 90 Day Fiance: Before the 90 Days star, and Nigerian rap sensation, Usman (aka “Sojaboy”) has replaced his music video for the song “I Love You” with the original version that includes a female model playing the role of Lisa. Fans of the show will know that this was a MAJOR point of contention between Usman and his “white beautiful woman” Lisa.

Here’s the original version of the music video featuring the model and uploaded by Usman on Monday:

The model-less version of the music video is not available on Sojaboy’s YouTube channel, but I managed to track it down for those of you wanting to compare:

Surprisingly, Baby Girl Lisa hasn’t made a separate social media post about Usman sharing the “hot model” version of the music video. She did respond to some comments about it though, as she hinted that this is all just a publicity stunt to get views and make money:

COMMENT: There was nothing wrong with the first video the one without the model.

LISA: Both videos making us money ???

COMMENT: The original video was so much better. His producer was right. [You’re] going to kill his career. You obviously know crap about music if you thought you or no other woman should have been in that video. ?‍♀️?‍♀️ bye. I’ll be waiting to see what your story is in the upcoming days and weeks.

LISA: Oh babygirl buckle up going be a wild ride ty for your support ???

Lisa also tagged Usman’s music industry buddy Abba in a comment and seemed to reveal that their on-screen animosity was faked for the cameras:

COMMENT: He released the music video with the beautiful model in it! Glad you finally see Abbas point.

LISA: Abba an I were always friends @abba_sboy1 ??

#90DayFiance #BeforeThe90Days Sojaboy Usman says in a video interview that he tried to break things off with Baby Girl Lisa before she made the trip to Nigeria, but her suicide threats changed his min. Plus, he plans to have more wives so he can have kids. https://t.co/vNoMQilOJp

Usman uploading the original version of the music video is just the latest hint that the couple may not be together any more. As we reported well before the season aired, Usman and Lisa got married in Nigeria back in August of last year. Since that time, Lisa’s posts on social media have been a roller coaster of emotions that go back and forth between despising rage and undying affection for her little Sojaboy.

There was even a huge catfish scandal after someone pretended to be an attractive young woman and allegedly managed to slide right into Usman’s DMs. Screen caps were posted, anger was expressed, and LOTS of drama unfolded. It was all but impossible to keep up with all the drama, and the whole thing just kind of fizzled out when everyone got fed up.

#90DayFiance #BeforeThe90Days Season 4 star Lisa Hamme had a history of over-the-top relationship drama well before dating Nigerian rapper Sojaboy on @TLC. Get details on an altercation with her husband in 2016 that included a car chase, crash & an arrest! https://t.co/wGAbzRoITr pic.twitter.com/BeNQ1ZBCou

Recently, rumors began to swirl that Lisa and Usman are divorced. From what I can tell, those rumors seem to stem from a Daily Soap Dish article dated February 27. The article plainly states that “Usman Umar and his partner, Lisa Hamme are no longer married to each other,” but it seems they are basing that on Lisa’s online relationship status being “single.”

As fans of the 90 Day Fiance shows and the 90 Day Fiance off-screen drama are well aware, most every cast member acts as though they are single until their wedding episode airs. So, a “single” relationship status is nothing close to a smoking gun of any sort.

My personal opinion is that the two are no longer together romantically, but they do have a tenuous bond that looks to be a combination of NDA adherence and PR. That is just the speculation of a fan who follows along with roughly seventy percent the online drama. To find out the actual fate of Sojaboy and Baby Girl Lisa, be sure to tune in for new episodes of 90 Day Fiance: Before the 90 Days airing Sunday nights at 8/7c on TLC.

UPDATE – Just after publishing this post, I saw that Lisa has since posted two photos of very attractive dudes who could easily sweep her co-star Yolanda off her feet! Lisa doesn’t mention Usman specifically, but it sure seems like an NDA-safe retaliation. Here are the posts:

@onethegifted where you at across USA lol you get me in trouble an fxxx sake I don’t even do anything ???

BEFORE THE 90 DAYS David Murphey is on social media! Plus Lana spoilers?