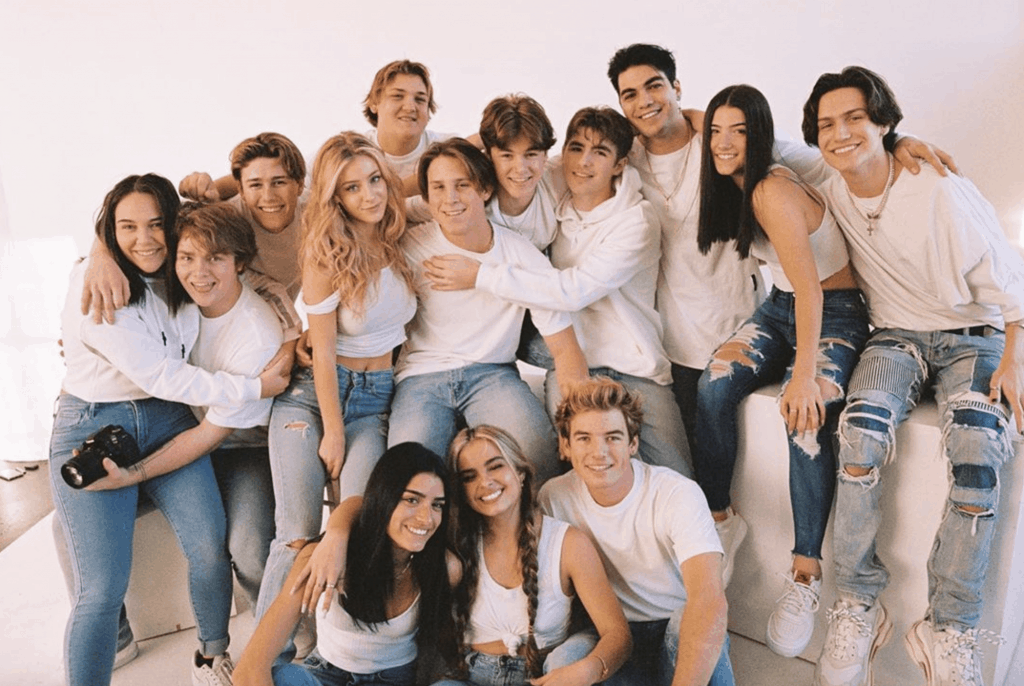 The California Tik Tok content dwelling known as Hype House is embroiled in a bitter conflict over business deals and ownership rights. After unceremoniously being pushed out of the house by the house’s manager Thomas Petrou (21,) the business venture’s co-founder Daisy Keech (20) is speaking out and filing a lawsuit.

“This kid is just on a power trip.” – Daisy Keech

In a nearly 23-minute YouTube video published Saturday, March 28, 2020, Daisy Keech told her side of the story about the tumultuous business venture that’s only 4 months old. Forbes.com unearthed documents showing she has also filed a lawsuit against Thomas Petrou, Chase Hudson, and The Hype House LLC, but Daisy did not mention this in her video. The documents state “This is an action for trademark infringement, unfair competition and false designation.”

Until recently Daisy thought Thomas Petrou was her best friend and business partner. She met Thomas at Jake Paul’s Team 10 house and became friends after they collaborated on a photoshoot. When he got fired from Team 10 Daisy hired him as a full-time photographer and editor.

According to Daisy’s account of events, Thomas brought up the idea of a content house and she got on board right away. Fellow influencer Chase Hudson (Lil Huddy) had an Airbnb in L.A. where Daisy, Thomas, and more influencers met up to test out the idea. They all vibed well so they decided to take the project seriously.

As soon as the Hype House was established, the media courted the group. Daisy recalls being intimidated by The New York Times. Chase had a manager, but Daisy was on her own and didn’t think to speak up to give herself and the other cofounders credit. She said she felt really intimidated and looking back she thinks she should have been a “boss a$$ b!tch at the time.”

Following The New York Times interview where Daisy failed to speak up for herself, there were more media interviews that she wasn’t present for. Daisy said she did speak to Thomas about her concerns about getting credit not just for herself, but for the other cofounders, before he spoke to the other media outlets. She felt that everyone who invested in the Hype House deserved credit and recognition. Thomas listened to what she had to say and agreed with her at the time. Looking back, she feels she may have been manipulated and only told what she wanted to hear “to get her to shut up.”

After the subsequent media interviews Daisy’s lawyer alerted her to the fact that all the news articles about the Tik Tok Hype House were reporting that Thomas Petrou and Chase Hudson was the founders of Hype House and that Chase had put down all of the money himself. Daisy says she has receipts proving who put down what amounts of money.

Daisy asked Thomas why he did not give her and the other cofounders credit. Thomas replied, “You weren’t there.” Eventually Thomas conceded that everyone deserved credit, but on social media was still acting as if he was the only founder of the Hype House.

Thomas was the only one who had access to emails coming in for the Hype House. He claimed that the project wasn’t making any money, and they were only getting free products in exchange for exposure. No one had access to anything to know whether or not any of the advertisements were paid or not so it was impossible to check to see if what Thomas was telling them was true. Daisy pointed out that while she cannot know, Thomas was obviously making some kind of money because he was flashing a $8,000 Cartier watch, a $10,000 cat, and was considering a Tesla purchase.

He also would not give anyone else access to the Hype House Instagram account, or any of the new brand’s social media presences. He also had full control over what was being told to the media. When another cofounder spoke to Thomas about a potential press opportunity, he rejected the idea because he said the press was always making him look bad. When the other co-founder spoke up about how he thought it was a good decision to do the interview, Thomas shot him down because he “made all the decisions around here.”

Daisy “A trend I’m starting to notice is that he love to have power. He loves to tell people what to do, when to do it, and how to do it. It started to feel like a fucking dictatorship in this house. In a house that he barely paid for.”

There was no transparency between Thomas and any of the founders. Daisy was slowly cut out of the group. She was no longer invited to events. When she asked him if he was trying to purposefully cut her out, Thomas told her that this wasn’t true.

Thomas WAS working with Daisy’s lawyer to help provide structure for the new business. During one of their business conversations, he revealed to the lawyer that he felt like Daisy was “just another hot Instagram model with a shelf life.”

This hurt Daisy because she thought Thomas was her best friend. She had been the one to give Thomas a job when he didn’t have a source of income.

At this point Daisy filed for the trademark, but Thomas told her she filed for it incorrectly. Daisy says while she was focused on creating business structure, Thomas would put off these business-related tasks. When the time came to allocate percentages to the business owners, Thomas was completely ignoring her.

It’s at this point that Daisy returned to the Hype House, where she lived, to find a huge music video production at the Hype House that she knew nothing about. Her room was full of people and clothing racks. She had her name on the lease, and felt that all leaseholders, as well as the landlord, should have been notified about the music video.

Thomas tried to tell Daisy that the $18,000 Daisy initially invested along with everyone else was just “so a bunch of friends could live together and hadnothing to do with the Hype House,” in an attempt to push her own as a business partner.

Daisy had just recently met most of the people who comprised the hype house, they were not her long-time friends. “Why would I put down $18,000 for people I just met?” she questions. “He knows the reason that we all put money down on that house was for a content house . . . . We went into this knowing we were going into business together.”

After that last confrontation, Thomas unfollowed Daisy on Instagram and held a meeting to ask the rest of the Hype House residents to unfollow her. She was escorted out of the house by a security guard.

She says she feels “disrespected, degraded, and used. And actually, most of all disappointed.”

She now feels that she was used for money and Thomas never wanted to go into business with her.

“I am one of the only people in the house who actually stuck up for themselves, and I get cut out. This is why people in his house are afraid to speak up, and to stand up for what they believe in. Because they’re just gonna be cut out of it after all the hard work they’ve already put into it because we don’t have any access to the socials and he conttrols what the media sees and what they think of us.”

Daisy says she forgives him despite what she’s been through.

Things she’s learned from the experience.

1. Look for red flags in a situation and listen to your intuition.
2. It’s important to stand up for yourself, be your own advocate.
3. When it comes to business, establish your ownership percentage before you contribute your assets.