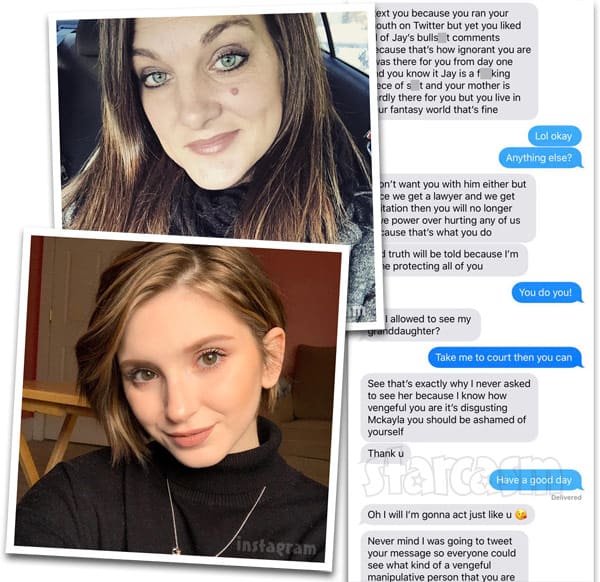 In case you missed it, things erupted on Instagram and Twitter yesterday after Caelan’s mom Shelly took to Instagram to express her frustration about McKayla allegedly keeping her from seeing her grandchildren because of some things she had said. The feud later spread to Twitter after Shelly retweeted Joel Osteen and that garnered a response from Jay, the boyfriend of McKayla’s mom Shannon. Shelly, Shelly’s sister Shari, Shannon, and McKayla would all eventually get involved as numerous accusations flew back and forth.

You can click here for a full recap from yesterday, but be prepared to stay a while!

Earlier today, McKayla came to her own defense against Shelly’s accusation by posting a series of alleged text messages between the two that look to have taken place after (or during) the social media posts yesterday. In the heated text exchanges, the two women go back and forth about how much Shelly wants to see her grandchildren versus how much McKayla allows her to see her grandchildren. Shelly even indicates at one point that Caelan may soon be getting a lawyer to set up visitation. “You do you.” McKayla replies.

Shelly responds by asking if she can see her granddaughter Gracelynn. “Take me to court, then you can,” McKayla wrote back.

Here are all of the text messages pieced together in order:

This is clearly not a good situation. It’s just more evidence that bad things happen when you retweet Joel Osteen.

All kidding aside, I certainly hope that both families are able to reach some sort of peace and create a non-hostile co-parenting (and co-grandparenting) environment for the two young children involved. Perhaps setting up visitation for Caelan is exactly what is needed in order to establish some steadfast rules and guidelines? We will certainly continue to monitor the situation and share any major updates.

TLC UNEXPECTED Did Chloe and Max break up?!