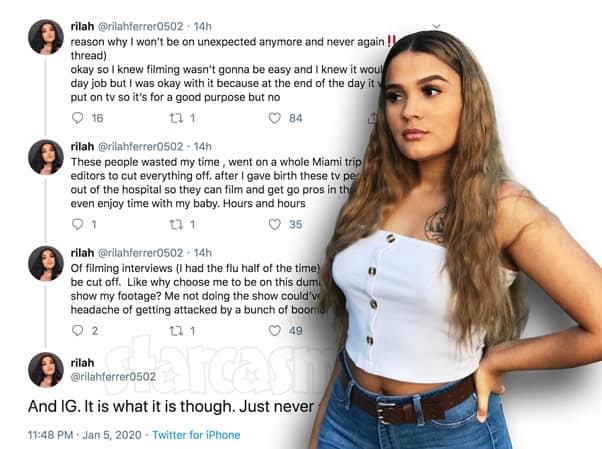 TLC’s popular teen pregnancy reality series Unexpected will soon be back for a fourth season, and we now have confirmation from one of the Season 3 moms that she will definitely not be returning. Rilah Ferrer took to Twitter to announce that she is one and done as she lambasts producers for her negative experience with reality TV.

Here is Rilah’s string of tweets announcing that she will not be back and revealing her frustration over how her segments were edited:

Okay, so I knew filming wasn’t gonna be easy and I knew it would be an all day job, but I was okay with it because at the end of the day it would be put on TV, so it’s for a good purpose. But no, these people wasted my time. Went on a whole Miami trip too just for the editors to cut everything off. After I gave birth, these TV people rushed me out of the hospital so they can film and get GoPros in the car. I couldn’t even enjoy time with my baby. Hours and hours of filming interviews (I had the flu half of the time) just for the footage to be cut off.

Like why choose me to be on this dumb show if you barely show my footage? Me not doing the show could’ve saved me the headache of getting attacked by a bunch of boomer ass b*tches on FB and IG. It is what it is though. Just never again.

In an earlier tweet, Rilah expressed her hope that fans would move on and not even remember that she was on the show. “Please forget about me like how y’all forgot about James from season 1 of Unexpected ??,” she tweeted.

Rilah not returning for another season will certainly come as a disappointment to numerous Unexpected fans. Her decision may have been a huge disappointment for show producers as well given the over-the-top drama surrounding Rilah and her ex Anthony Vanelli after last season!

In case you missed it, Anthony was arrested for domestic violence after allegedly attacking Rilah back in October. After his arrest, Anthony reportedly fell in love with some young lady from California who slid into his DMs. (No, she wasn’t a boomer ass b*tch.) And let’s not forget that the boyfriend of Anthony’s mother, who was featured last season giving advice to Anthony while shooting hoops, is currently in prison on a murder charge! Actually, I’m guessing that TLC would not want to include Markos’ arrest for murder on the show, but they certainly would have put Anthony’s arrest front and center.

We have #Unexpected dad Anthony's mug shot photo from his domestic violence arrest last month as well as an update on his case. Plus, @rilahferrer0502 lashes out at Anthony's new boo, a young lady from California that he met on Instagram. https://t.co/VBWCbSjRKm

Unexpected isn’t the only thing Rilah is quitting. This weekend she bailed on Instagram completely and tweeted: “deleted my Instagram.” She later called the platform “toxic” and explained that “protecting my peace is way more important then Instagram followers and likes by strangers.” She then said of her preferred platform: “I like twitter better ?‍♀️ most of y’all aren’t sensitive and rude.”

But, it seems that Rilah’s issues with the “boomer ass b*tches” followed her over to Twitter. Her thread about her bad experience being on the show inspired this conversation with a follower:

As far as the rest of the cast for Unexpected Season 4, will will continue to update as we find out more, so stay tuned!