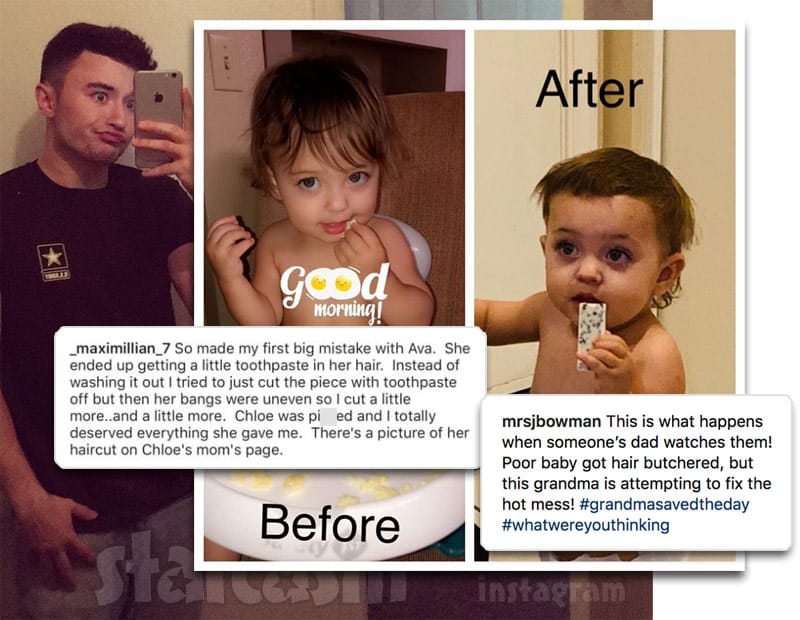 Unexpected dad Max Schenzel probably still dreams of being a millionaire someday, but it will most likely not be as a barber. The 19-year-old dad was watching his one-year-old daughter Ava this week when she got some toothpaste in her hair. Instead of just rinsing the toothpaste out with water, Max chose to cut it out with a pair of scissors. After cutting out the toothpaste, Max noticed Ava’s “bangs were uneven,” so he “cut a little more..and a little more.”

I think you know where this is headed.

Ava’s grandma Jessica shared a photo gallery of barber Max’s disasterpiece on Instagram along with a frustrated caption. “This is what happens when someone’s dad watches them!” Jessica wrote. “Poor baby got hair butchered, but this grandma is attempting to fix the hot mess!” She concluded her caption with the hash tags #grandmasavedtheday and #whatwereyouthinking.

This is what happens when someone’s dad watches them! Poor baby got hair butchered, but this grandma is attempting to fix the hot mess! #grandmasavedtheday #whatwereyouthinking

What’s astonishing to me isn’t just that Max thought the best way to get toothpaste out of his daughter’s hair was to cut it out with scissors, but how terrible he is at cutting hair! How do you even cut hair that uneven? Ava somehow still has full-length hairs along with hair cut to less than half length! And he even cut around her ears?

Max also shared (and deleted) a photo and explained his side. He revealed that Ava’s mom Chloe was also upset with him, and he admitted that he deserved the outrage: 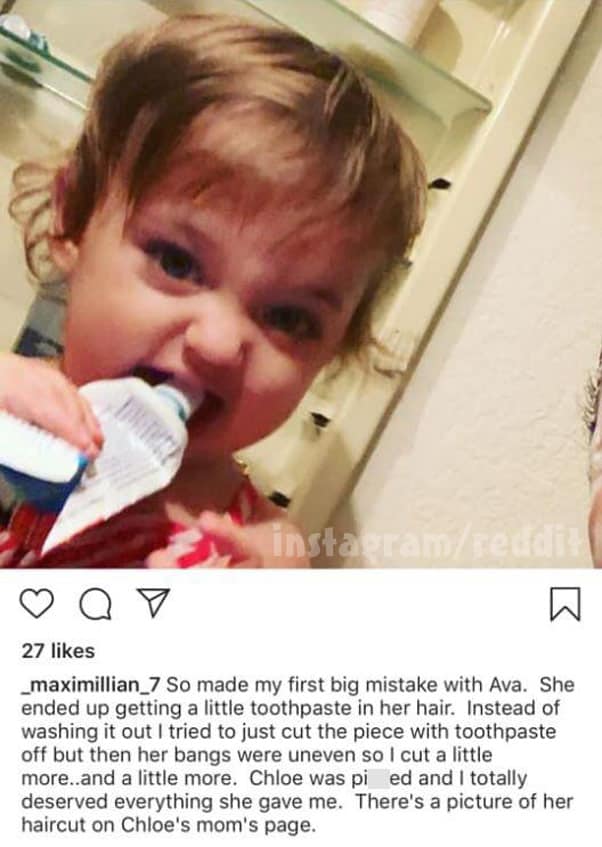 Judging from Jessica’s comments on her gallery, it sounds as though Max’s explanation for what happened evolved a bit over time. One commenter pointed out that Max was attempting to cut something out of Ava’s hair. “Funny cause he just told Chloe that her bangs were in her face. But Chloe and me had just trimmed them the other day, so….” Jessica replied. “That’s no reason to have shaved the side of her head behind her ear. Did she really get that much ‘toothpaste’ in her hair?? It was a mistake, I get it, but he should have called Chloe to let her know.”

Fortunately, Ava took the hair catastrophe in stride. “She’s still all smiles!!” Jessica said of her granddaughter’s demeanor throughout and after the fixing process.

Max, Chloe, Jessica, and Ava will be returning to TLC on Sunday, August 4 when Unexpected Season 3 premieres with four new moms! Click here to meet three of the new couples to be featured!

Meanwhile, Max still has a jail sentence looming stemming from his felony theft conviction last year. He was scheduled to serve his time behind bars in May, but his sentence was delayed after he tested positive for Fentanyl more than once and began treatment in an outpatient rehab facility.

UNEXPECTED Caelan and Tim got into a fight, McKayla took out a restraining order?