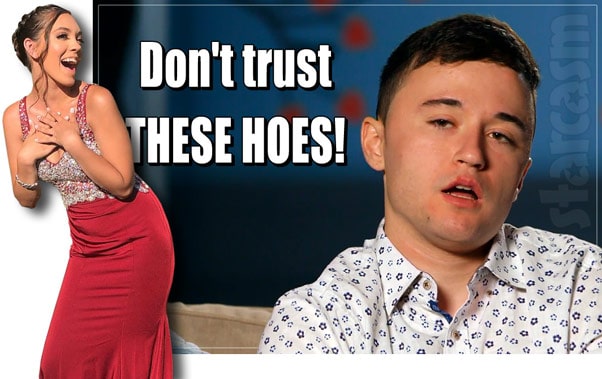 Unexpected dad Max Schenzel is a 20-year-old convicted felon and continuing drug abuser, but he wants to make sure that fans of the show know that his daughter Ava’s mother, Chloe Mendoza, is far from perfect as well — for the last 30 days at least.

“This girl right here has been cheating on me for the past month behind my back,” Max captioned a since-deleted photo of Chloe on Instagram. “I gave her everything and all the time in the world and in return she was with another guy,” Max continued. “Yet her and her parents blamed me for everything.”

Max then went into detail on some of Chloe’s alleged smoke screen tactics. “She would also unshare her location while going to the guy’s house and say her ‘phone died and that she’s at her grandma’s’.”

Max concluded his caption with a word of advice for men everywhere: “Don’t trust THESE HOES!”

In the comments section, Max slammed the door on any future heterosexual relationships in dramatic fashion. “Never loving a girl again!” he declared. Sorry ladies.

Despite the betrayal, Max was able to still see the silver lining in his relationship with Chloe. “At least my babies [sic] cute though,” he wrote.

Chloe hasn’t publicly responded to the cheating allegations, but that could be due in part to the fact that she is currently embroiled in a feud involving another cheating scandal!

UPDATE – We asked Chloe about Max’s cheating allegation. “Lies. Hence why Max took it down,” she tells us. “It was a misunderstanding,” Chloe continues. “Also, me and Max are not together. Can’t cheat if we’re not dating.”

In case you were unaware, Matthew left Hailey for Hailey 2 just before the birth of his daughter Kinsley. Here is a complete relationship timeline to fill you in:

Getting back to the present… According to both Chloe and Hailey 2, the show moms got together and hopped over to the hotel where Hailey 2 was staying with Matthew. When the moms got there, Chloe was very clear that she was not a fan of Hailey 2 and had no interest in being friends, which created a bit of an awkward situation.

Chloe says that the other moms were all trash talking Hailey 2 just prior to meeting her, but that they shifted gears and were completely nice when they got face to face. Chloe even changed the caption to her Instagram photo of all the moms together to read: “They’re all fake.”

Hailey 2 and Matthew did an Instagram live session together in which Hailey 2 referred to Chloe as a “crack wh*re” before talking more trash. “Chloe’s just lucky she didn’t get hit in the go**amn mouth, for real,” Hailey 2 said of their interaction in New York City. And speaking of Chloe’s mouth, Hailey later called Chloe out for her lack of braces. “I’m sorry your mom couldn’t afford $7,000 to fix your f***ing teeth because mine could!”

Anybody else getting the sneaking suspicion that Hailey 2 is probably already sliding into Max’s DMs?

Unexpected OG McKayla Adkins has responded to the feud with a statement in which she confirms that she didn’t like Hailey 2 before meeting her, but was nice to her when they met up face to face. She explains that she is that way with everyone:

Here’s my POV: I feel like everyone should be nice to everyone. I didn’t like Hailey #2 before I met her, that’s the truth. But once I got to know her she was pretty cool and I apologized to her for judging her before I knew her. If being nice to everyone is being fake then I guess I’ll always be fake. Like Tyra said, you never know what someone’s going thru so just be kind to everyone.

For those of you wanting to check out the Instagram live sessions for yourself, portions of them have been preserved for posterity thanks to some dedicated Unexpected fans and the diligent archiving efforts of Instagrammer @UnexpectedUpdates. Here you go:

@get_like_hailey via instagram live with @matthew___01 . this is not my screen recording of the live i found it on facebook but it’s all i can find of her live unfortunately . #tlcunexpected #unexpected #tlc #tv #tvshow

@get_like_hailey & @matthew___01 via instagram live today . Here’s some clips of hailey’s live today. Sorry if their choppy or out of order , i apologize! #tlcunexpected #tlc #unexpected #tv #tvshow

Be sure to keep up with all the Unexpected drama with new episodes airing Sunday nights at 10/9c on TLC!