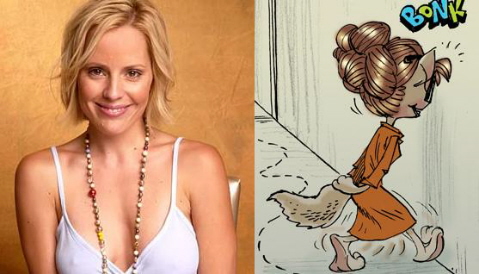 It looks like Emma Caulfield is ready to drive a stake through the heart of her husband Cornelius Grobbelaar.  The actress best known for her role as the vengeful Anya in Buffy the Vampire Slayer has filed divorce papers citing the old go to “irreconcilable differences.”  The two have been married for four years.

The 37 year old actress and her husband Grobbelaar are not commenting publicly on the split.  They have no children together.  Official documents show the couple separated on May 7th, they were wed on August 23rd, 2006.

In an interesting side note Emma is also the co-author of a webcomic series titled CONTROPUSSY.  The following is the description of the series from the CONTROPUSSY website:

Contropussy is a webcomic by Emma Caulfield, Camilla Rantsen, Christian Meesey and Thomas Mauer. It chronicles the adventures of Contropussy and her friends. By day, Contropussy is an ordinary house cat, but at night she comes alive and searches for excitement in the world outside. Think of it as a more subversive Sex and the City with animals.

Here is a video of her discussing the comic CONTROPUSSY with Camilla Rantsen:

Maybe Cornelius wasn’t a big comic book fan.  That would certainly be more exciting than irreconcilable differences even if it were more contro (fight it) versial.