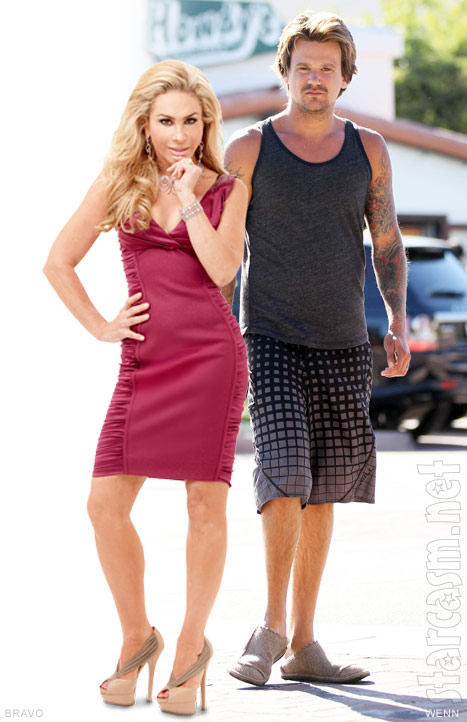 Adrienne Maloof and Sean Stewart began dating a couple of months ago after Adrienne split from husband Paul Nassif. The former Real Housewives of Beverly Hills star was nineteen years Sean’s senior, but they seemed to enjoy each other regardless of the age gap. Sean was even introduced to Adrienne’s children. Unfortunately, it seems the romance has run its course as Adrienne and Sean have reportedly split.

“They’ve decided to distance themselves and become friends. Nothing bad happened,” a source close to Adrienne told Us Weekly. “They’re still going to hang out as friends, they enjoy each other’s company.”

During their courtship, they were spotted out on several dates where witnesses observed them laying on the PDA and seeming extremely comfortable with one another. Photos even surfaced of them at Los Angeles hot spot Crustacean where they were seen with their arms around each other. They definitely didn’t make any effort to hide the romance.

Back in January, Adrienne opened up about her relationship with Sean telling People, “This started as a business relationship and now were casually dating. It’s casual, real casual.” She also added that Sean was “a lot more mature than a lot of 60-year-olds at this time in his life.”

“She’s not looking to date anybody right now. She’s going to focus on her kids and brands,” the pal tells Us, insisting, “They’re still really good friends and they still hang out.”

Adrienne Maloof is currently starring in the third season of The Real Housewives of Beverly Hills. Last week, it was announced that it would be her final season.

And poor Sean is more than likely suffering from some serious Maloof withdrawals right about now. Here you go Sean, your dad sympathizes with your pain…