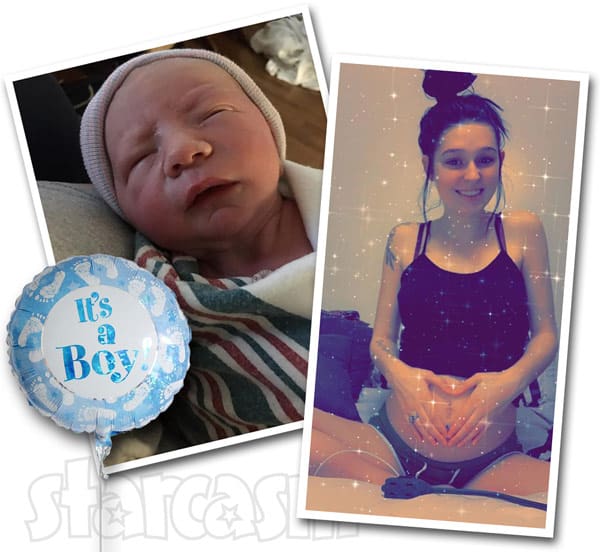 Hailey herself has yet to post on social media after giving birth, but her close friend Harley shared a couple photos of Levi on social media. “This little man stole my heart ? Levi Carter ?,” Harley captioned the images. Harley doesn’t mention how Hailey is doing, but hopefully we will have an update on Levi’s mom soon. 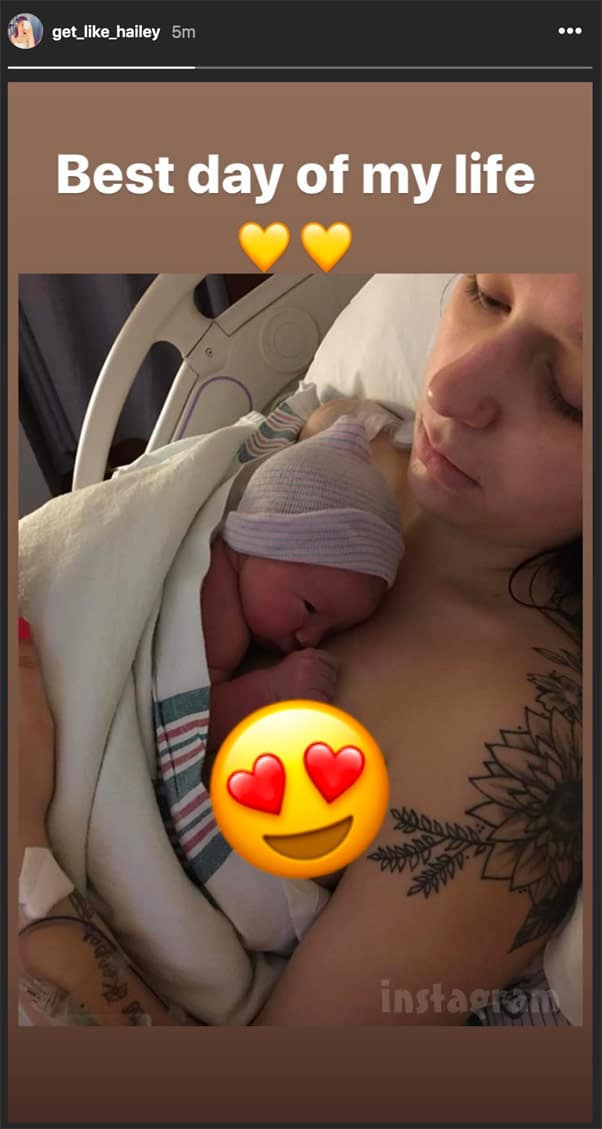 After 38 hours of being at the hospital, and unbearable pain, Levi Carter Tilford made his arrival into this world April 2, 2020 at 1:14PM weighing 5 pounds 13 1/2 oz ? The love mommy has for you can’t begin to be described with words. You complete me baby.

We may not have heard from Hailey 2 since Levi’s arrival, but she shared numerous pre-birth updates throughout her labor via her Instagram stories. Here are some of her posts from the last 24 hours: 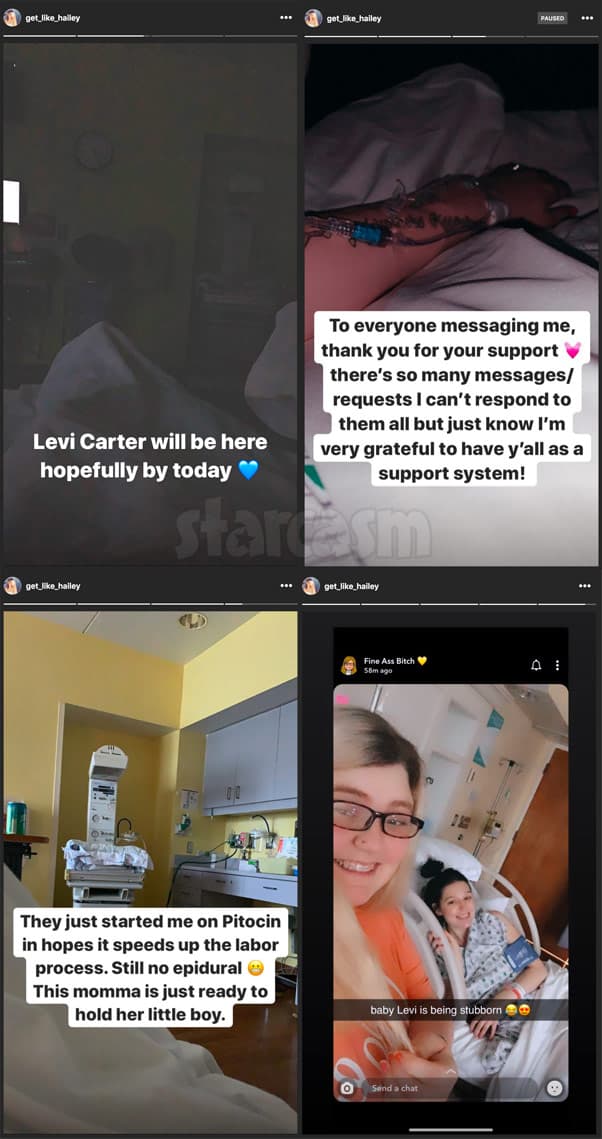 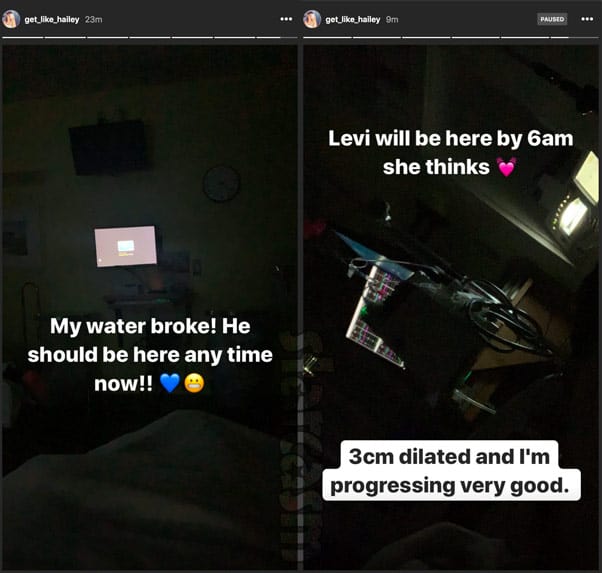 As Unexpected fans are well aware, Levi’s dad is Matthew Blevins, who is also the father of Unexpected mom Hailey Tomlinson’s daughter Kinsley.

Of course, being the biological father certainly doesn’t mean Matthew will be filling that role in Levi’s life. One commenter recently asked Hailey 2 who Levi’s father is. “The SPERM DONOR is Matthew Blevins,” Hailey 2 replied. “Levi doesn’t have a ‘father’ figure. Thanks.”

Matthew and Hailey 2 had numerous volatile break ups during her pregnancy, with the most recent (and maybe final) one coming earlier this year. After that split, Matt has been making posts suggesting that he isn’t the father — a claim that Hailey 2 probably wishes was true, but adamantly denies.

If you’re curious whether or not Matthew was present for the birth of Levi, the answer is no, no, and no. Not only is there currently a global pandemic, which is forcing hospitals to restrict access to delivery rooms, but Hailey has stated numerous times over the past few weeks that she would not allow Matthew in the delivery room.

Plus, Matthew is reportedly out of state after taking a road trip with friend. Despite the social distancing mandates due to the coronavirus outbreak, the scrawny scooter-ridin’ Lothario has been sharing Instagram stories looking for girls wanting to meet him in a Louisville hotel room.

He announced recently that he was taking a trip to Colorado with a friend and was looking for somewhere to stay. Matthew was reportedly courting a young lady online who lived far away, but I am unsure if she was from Colorado. Regardless, I imagine that marijuana being legal in the state weighed into Matthew’s decision making.

Here are a couple posts from Matthew’s Instagram stories: 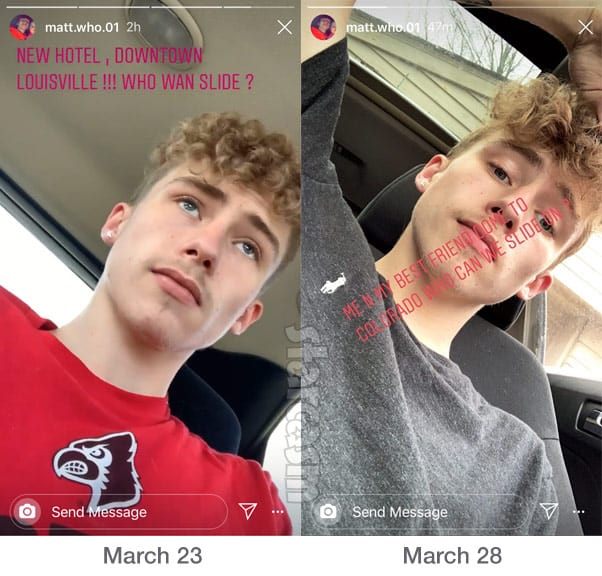 For those Unexpected fans who are looking forward to all this drama playing out on the next season of Unexpected, I have some bad news and some good news. The bad news is that Hailey 2 WILL NOT be on the new season — or at least that is what she has been insisting ever since they officially announced her pregnancy at the Couples Tell All special.

Hailey 2 was under the impression that Matthew was also not going to be back for another season. But, as everyone except teenagers named Hailey from Kentucky are well aware, Matthew lies about pretty much everything. He has reportedly been filming with Hailey 1 without telling Hailey 2.

I cannot say the same for Matthew. I hope he gets arrested for trying to haul 50 pounds of weed from Colorado to Kentucky and gets put behind bars for a long time. Something tells me that jail and/or prison is just about the only method of birth control that will work on him.

UPDATE – After the birth of Levi, Matthew shared an Instagram story post that seems to reveal that he didn’t quite make it to Colorado as planned. “Who trynna link in Gatlinburg?” he captioned a blurry photo of his knee. That was followed by a brief video he shot walking the streets in Pigeon Forge, Tennessee.