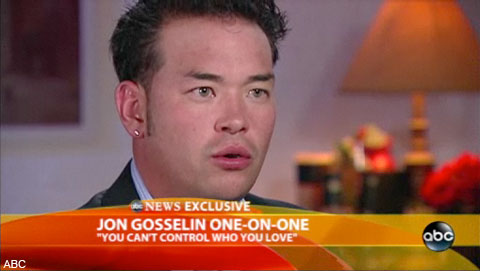 This morning another part of Jon Gosselin’s interview with Good Morning America’s Chris Cuomo aired – and Jon had a lot of anger to let out.

It begins with Jon making a bold statement: he feels like he loves new girlfriend Hailey Glassman more than he loved Kate. Jon then says he was jealous of Kate’s bodyguard, Steve Neild, while she was traveling. Kate has denied being romantically involved with Mr. Neild, but she did accompany Steve Neild and his wife for a formal evening last night.

Jon’s voice rises with anger as he says

“She knows the truth. I wish to God she would speak from emotion, and from her heart, just like I’m doing now. She broke my heart because I put blood, sweat, and tears into our marriage, and it was over like that. AND I HAVE NO ANSWERS.”

You can watch the video at ABC News.

Watch the video below:

Hugh Hefner files for divorce from wife: Who is Kimberly Conrad Hefner?