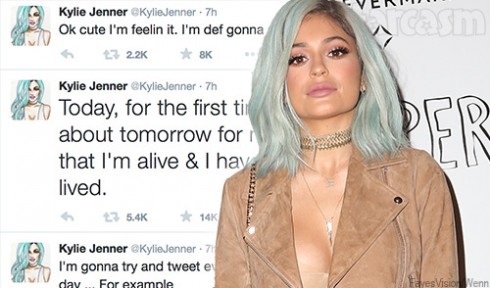 Kylie Jenner apparently had a lot on her mind last night. Unable to sleep, the 17-year-old instead went on a 2 a.m. rant about bullies, self-confidence, her education and more.

It seems everything started when Kylie learned there are some rumors about her circulating online.

I appreciate and love u guys. Blogs & bullies have created rumors on me for years. If that's your case too. STAY TRUE. Different is dope

Someone then tweeted a rude message at Kylie. That person eventually deleted the tweet, but not before Kylie saw it and responded, “I love feeling & embracing everything feminine. But I am not a ‘ho’. That I am very sure about.”

After retweeting a few positive messages from fans, Kylie went on to say she’s happy about how everything is going…

Today, for the first time, I am very excited about tomorrow for no damn reason. Just that I'm alive & I have a wonderful life to be lived.

For the grand finale, Kylie addressed reports she dropped out of her homeschooling courses.

Oh AND.. I finished school last week.. & I know I never post on social media when I'm in class but that doesn't mean…

I don't encourage education! Because I do! gooooodnight.

After getting all that off her chest, it seems Kylie was finally able to get some sleep.

Kylie and Tyga are back together–for now