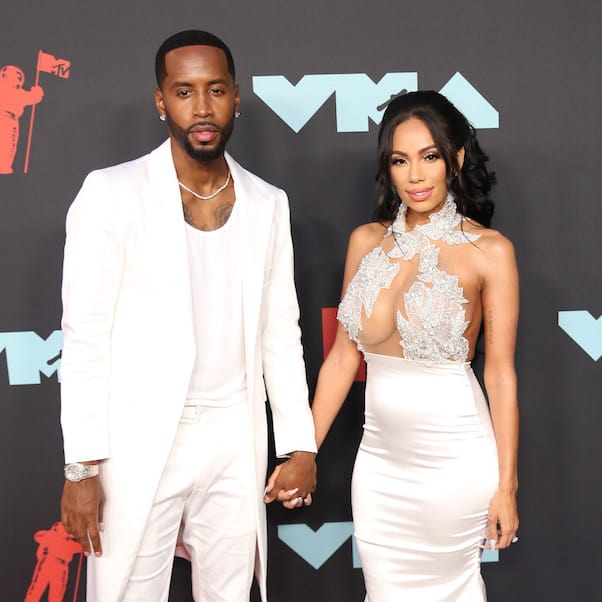 Mona Scott pulled out all the stops for Love & Hip Hop New York Season 10! Just days after the news that OG cast members Chrissy Lampkin and Jim Jones are returning to the show, we’ve gotten word of the LHHNY Erica Mena and Safaree comeback as well! Erica and sex toy model Safaree have reportedly been spotted filming scenes for the new season, production for which has just gotten underway.

It’s no secret that LHHNY’s ratings have been on a steady decline the last couple years; LHHNY Season 9’s ratings were under half of what Season 3 clocked just five years earlier. So it looks like the show’s new production company — and creator Mona Scott-Young, who’s still at the helm of the ship — have been working to bring back as many classic cast members as possible in order to drum up interest in the new season. (They’ve also got some extra time to build up anticipation: because the new production company needed more time to get the show’s house in order, Love & Hip Hop New York very likely won’t have its usual autumn premiere this year.)

#MenaMondays are coming back! @iamerica_mena is returning to #LHHNY season 10 alongside soon to be husband #safaree ! Are you excited to see her back in the concrete jungle?? #COMMENT #loveandhiphopnewyork . . #lhhatl #lhhmia #lhhny #lhhh #lhhhollywood #vh1

In case you missed their big drama earlier this year, it looked like Erica may have been about to break things off with Safaree after his ex Gabrielle Davis shared some eyebrow-raising texts between herself and the Jamaican Stallion. (BTW: Though it also looked like he’d pulled out of the deal, Safaree’s sex toy is very much a thing.)

But now they’re back on, and now Erica and Safaree are reportedly expecting their first child together. No doubt the gossip about their love lives and Erica’s alleged pregnancy will make up a huge part of their storyline for LHHNY Season 10.

We’d be remiss if we didn’t point out that so far there’s no word on Peter Gunz’s return to the show. If these big names keep coming back, though, it could be just a matter of time.