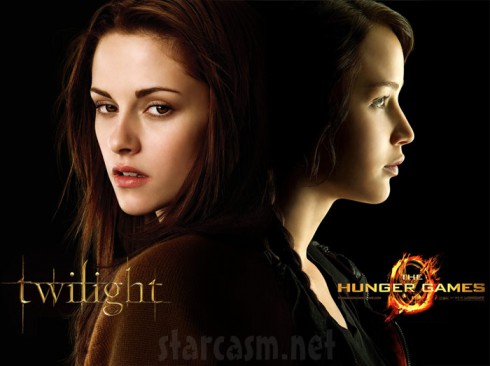 When OK magazine went public with the Feud between Hunger Games star Jennifer Lawrence and Twilight star Kristen Stewart, they quoted one of “Jennifer’s pals” as saying that she is more motivated to overthrow Kristen now that the feud is “out in the open.” The verbal sparring was brutal. Kristen called Jennifer “plain.” Jennifer criticized Kristin for not reading the Twilight books. Mud was slung. The only problem with this made-for-the-tabloids drama was that it was totally made BY the tabloids. Completely false. Bunk. Fantasy.

Earning a whopping “0” on the Gossip Cop’s real to rumor scale, this story has no legs at all. The truth behind the feud? Well, the truth is that there is no feud at all.

But, just in case Kristen got the wrong idea, Jennifer decided to get way out in front of the rumors. Lawrence emailed Stewart, the Vampire Queen of Hollywood, directly. Watch the clip below from Access Hollywood to hear the story straight from the source.

So, the tabloids just made it up . . . out of nothing. And, instead of standing by and watching it play out, Jennifer Lawrence decides to cut right through the hype and take charge of the story. Excellently played, Katniss! And Stewart responds with class. Nice form, Bella! The only one in this story who ends up looking bad is OK magazine. Maybe we should start calling it “D’oh K!”

If you come at the controversy from another angle, though, you can see why someone would be tempted to make this particular story up (not that that makes it OK). Everyone was ready for it. The world seemed to have been waiting for a Hunger Games vs. Twilight cat fight. Even though it was made of pure air, everyone from Access Hollywood to the Muppets is picking sides between the two franchises. Why shouldn’t the stars?

And, more importantly, CLICK HERE to see where Kermit the Frog comes down on the rivalry.

And, to hear what Josh Hutcherson and Jennifer Lawrence think about the comparison between the two films, check out this clip from MTV news:

So where did all this Hunger Games/Twilight trash talk get started? It probably has everything to do with both books being popular young adult fiction making the transition to the big screen, but . . . it is more fun to think that maybe Vanity Fair picked the fight, subtly of course, last November. Check out this clip and see what you think.

And what does Liam Hemsworth think about being compared to Robert Pattinson? Well, as it turns out, not much. CLICK HERE to find out.

In the end, as silly as all this is, it is probably great for both movies and a real pain for their stars. The world loves to watch folks squirm, though. Let the games begin!

The City’s Kelly Cutrone was once a rock star, had a record deal with Atlantic