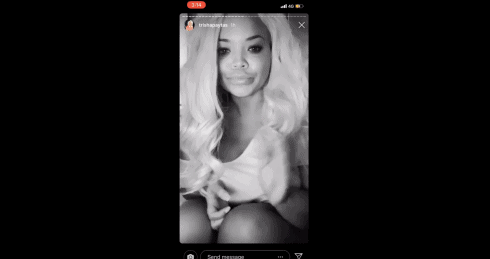 It’s been a few weeks since YouTuber Trisha Paytas finally confirmed that Jason Nash broke up with her back in February after she released an “expose” video about him and his friend and business partner David Dobrik. Since revealing the split, Trisha’s been crying about it on YouTube and Instagram, and behaving erratically. She stated that getting over this breakup has been extremely hard because this is the first time an ex *hasn’t* cheated on her.

But last night, on both Twitter and Instagram, Trisha revealed that she just found out that Jason in fact had cheated on her at least twice during their one-year relationship. Trisha offered no receipts to prove her claims, but says she received screenshots from a girl that showing Jason’s old phone number.

Here’s Trisha’s reveal video, followed by a transcript of her claims:

So ya’ll remember that guy that I thought was so great?…Turns out, I just got text messages sent with his old phone number, the phone number he had the whole time we were dating, of him cheating on me. Not once, but twice, and maybe more times than that,” Trisha says in her Instagram video. “So, suffice to say, I f**king hate cheaters more than anything in the whole world. I actually didn’t lose anything because that’s f**king creep and a f**king pervert anyways. So f**king good riddance, I can finally free myself.

Trisha adds that she’s not going to make a (second) video about this, and says she’s actually grateful to have found out because now she can move on.

“I have f**king so much good sh** coming out for myself that I’m focusing on…that I don’t care,” Trisha says. “I officially don’t give a f**k anymore. I’m sick. I’m sick to my stomach right now.” She further states that she’s grown up now and doesn’t need to make a video because “cheaters get what’s coming to them.”

The night Jason ended things for good in February, Trisha took a mix of opiates and alcohol and ended up on a 5150 hold after telling medical professionals that she wanted to die. A few days later, after Trisha left the psych ward, she continued talking to Jason Nash on the down low, but he cut all ties to Trisha following her May 8th birthday party.

Since then, Trisha’s revealed (on Instagram and Patreon) that she was on meth the night Jason ceased contact with her and blocked her number, and that she tried meth once before after the breakup, which landed her in the hospital. Additionally, Trisha’s meth hospitalization was separate from her hospitalization for the opiate and alcohol mix. 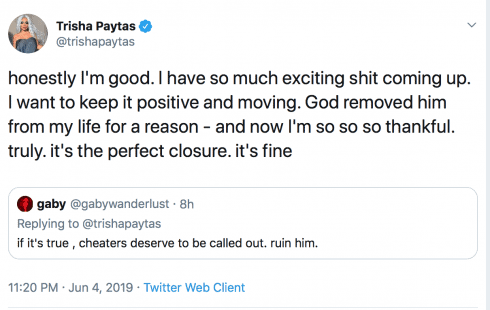