Top Chef Masters Season 3 started Episode 6 right up tonight with a quickfire challenge called 7 Minutes in Heaven. The display table was full of expensive, luxurious food, and you could see the chefs’ eyes light up as they walked in and saw it. Finally, something good to work with! No bugs. No fast food. Ah . . .

Curtis Stone tells the chefs that their challenge will be to make a dish that will take someone to heaven. They’re masters and they have lobster and fois gras to work with. Heaven’s no problem. The twist? They only have 7 minutes to do it.

The scene flashes back to the Top Chef episode where Tom Colicchio set the time for the quickfire by cooking a dish in 8:37- the one and only time we’ve seen his royal chefness cook on the show. 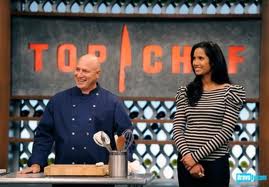 I always thought that was an unfair challenge, though. Tom had his ingredients all laid out and his recipe in mind,and the cheftestants had to come up with a dish, fight the other chefs for ingredients, and then start cooking; but they still only had 8 minutes and 36 seconds. Now, using the same spurious comparison for reference, the Top Chef masters are asked to do all those things with even less time to work with.

Unfair or not, they came up with some beautiful food. I would have loved a taste of Traci’s carpaccio or Naomi’s fois gras, not to mention Mary Sue’s scallop. The chefs had to judge each other, which seemed to be awkward for everyone except Naomi, but in the end Traci won the challenge, and no one seemed surprised or chagrinned. Hugh said Traci’s the one chef in the competition that he’d be willing to wash dishes for just to be in her kitchen. 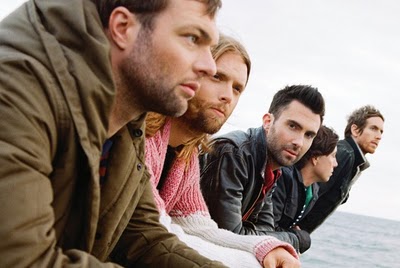 Maroon 5 showed up as guests for this episode, and we’re wondering whether Adam Levine hired a new agent over the summer. First The Voice, now this? Adam and company appeared on a video monitor a minute later to talk about their favorite foods, and the chefs learn that they are going to cook for the band in two teams . . . in RVs . . driving down the road. The explicit challenge is to make food that would remind the members of the band of home while they were on tour. The chefs ran straight to Whole Foods to shop, and then hit the bumpy road with 3 burners, a tiny oven, and no counter space (if you don’t count the toilet) at their disposal. Let the elbow (and ego) bumping begin!

After some suspiciously sharp turns and a few potholes that we think the drivers aimed for, the chefs were able to finish their dishes whle the RVs were parked in a lot, so space was a big issue but at least the camper wasn’t throwing them around. No one was happy with their food, but they plated everything up and served it up to the band and the judges.

What a relief it was to see Gail Simmons among the judges. James Oseland seems to have been cast as the heavy-weight judge this season, but he isn’t doing the trick. He’s a fine color man, but he just isn’t an anchor, and he comes off as tempermental and a little silly most of the time this season. He’s better tonight, though, than he was when his old intern, Alan Sytsma (who is now a Senior Editor for Grub Street), was also judging. During those episodes Oseland almost seemed to be drunk with power (or just drunk), and Alan could do little but look on adoringly at his former mentor. 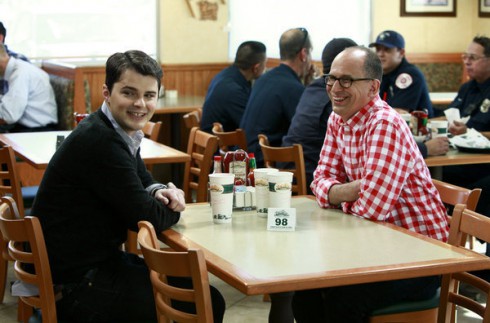 The two teams ended up inadvertently competing head to head, since they cooked many of the same dishes. On the corn soup, the first group seemed to come out on top, but most of the nods seemed to be going to the second team of Traci, Mary Sue, Naomi and Hugh. After service, the chefs talk enough to realize that they’d made many of the same choices and start worrying about how they’re going to stack up in direct comparison. Well . . .they were going to worry about something. Why not that?

At judges’ table, Gail has worked her magic. James is still silly, and Danyelle tries too hard, but Gail has them anchored down, and it is all good. (If anyone from Bravo is watching right now, please keep Gail on TC Masters. Please, please, please!) After only a few criticisms and a lot of praise, the second team is told that they are the winners, and Traci is chosen as the individual winner for the week. 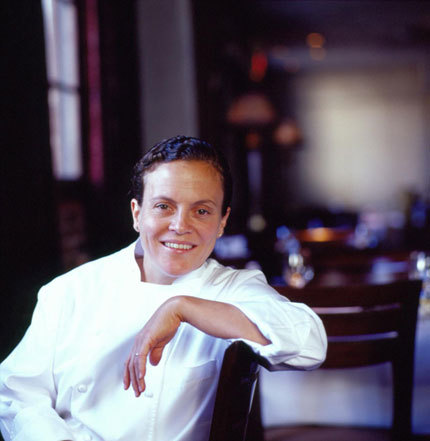 That leaves Celina, Floyd, and Alex to face the judges for possible elimination. Alex’s dish was probably the worst of the night, but Celina seems vulnerable. The judges are apologetic, but very critical of Alex. Their criticisms of Floyd were gentler—he didn’t play to his strengths, his choices didn’t come through. Celina gets the worst criticism, in part because of its brevity. According to Daniel, the food was “soooooo indistinctive; so forgettable.” Ouch. 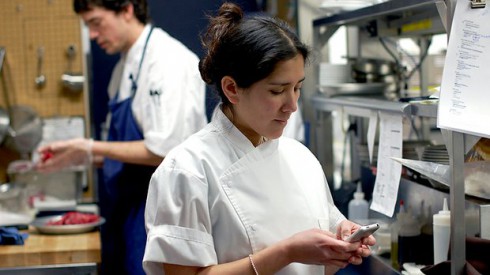 Once the chefs leave the room, the judges come out swinging. They seem to be working each other up into more and more serious criticisms, and I have to start wondering whether they actually believed any of the modest praise they offered while the chefs were in the room.

When the bottom three chefs (Alex, Floyd, and Celina) return to face the judgment, Curtis tries to ease things a bit by admitting that the challenge had been almost impossible. Gail tells Alex she could taste the stress in his food. Danyelle tells Floyd that there was nothing special about his food and she thought anybody could’ve made it. James criticized the pairing of Celina’s spanakopita with couscous saying that each dish made the other worse. This is a little awkward, since Gail has just made a speech about how the chefs shouldn’t worry about pairings, just about great dishes. Both of these dishes were on one plate, though, so James has a point. 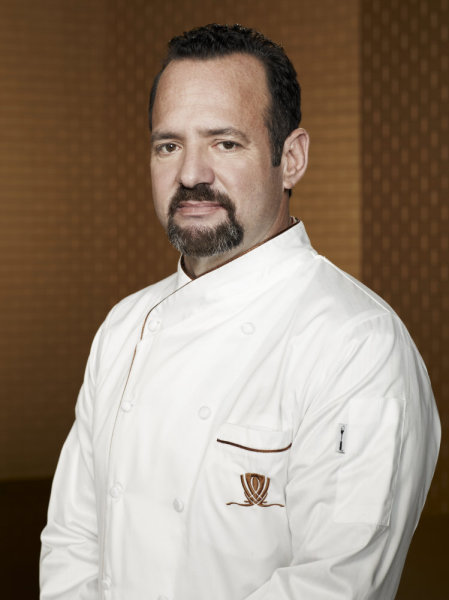 The results come in, and Alex Stratta has been eliminated. That’s a bit of a surprise, since Celina looked to be in deep trouble this week. The decision signals that the judges are really focused on judging a chef for the food they put on the table each night and not on any cumulative judgments of their performance on the show over time. Alex’s pasta was pedestrian and overcooked, so he deserved to go home; but, Celina has struggled more consistently in the competition. Now, we know what’s up.

I like Top Chef Masters but the elimination tonight made me aware of how little is really at stake for these contestants. Their pride is on the line, of course, and their charities; but, they all pack their knives and go back to their own restaurants where business was booming before they became TV personalities. Very little really is at issue, after all, since no one could extrapolate from failure in these ridiculous challenges to failure as a restaurant chef. Winning definitely means something, but losing really doesn’t. Not even the judges’ criticisms seem as incisive or hard hitting as we’re used to. Some of that has to do with Tom Colicchio’s absence, of course, but a lot of it comes from the judges’ deference to the chefs.

In the end, it is fun to watch such insanely skilled people do remarkable things with food; but, it is even more fun to watch when there is more at stake. And that’s why, as cool as Top Chef Masters is, it will never be quite as good as Top Chef.