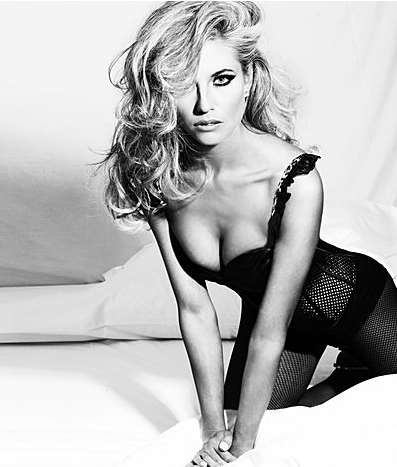 Some people are outraged at the  Miss USA Pageant’s sexy promotional photos, especially after last years controversy about Carrie Prejean’s topless photos. This year the ladies aren’t topless, but all 51 contestants dolled up in fishnets and bustiers to stretch and pose seductively in during a photo shoot with Fadil Berisha entitled “Waking up in Vegas.”

Here’s a behind the scenes look:

In the video Fadil explains the reason behind the revamped Miss USA style:

“To change the look of Miss USA, which I think we have been going that direction for many years now. This was like pushing it this time, but I think we succeeded. All of them were into it and excited about getting these sexy shots.”

The pageant’s owner Donald Trump also defends the pics. His supporting evidence? Ratings (should there be any question?). He tells New York Daily News:

“They are a little bit sexy, but I’ll tell you what — everybody’s watching, so I have no problems with it.If you look at Miss America, it’s now off network television.”

Trump may be chasing profits, but Miss USA is leading the way for pageants to get over their identify crisis and be honest about what they are: show business. Particularly, sexually-charged show business. Women have been prancing around in their bikinis being judged against each other for decades, but they were there under false pretenses of creating World Peace and getting Scholarships (never-mind the tens of thousands they spend getting ready for this showcase).

“The women in the pageant are not looking to bring peace to the world; they are all aspiring actresses and models.Their dream is to be in the Victoria’s Secret fashion show.”