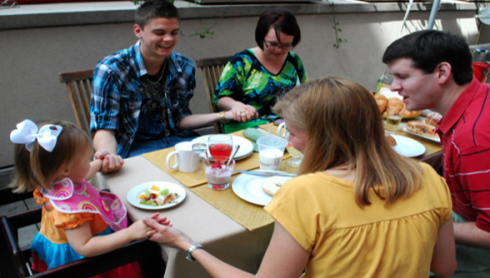 The last season of Teen Mom opened with two epsiodes. You can read the first episode’s recap “Separation Anxiety” here.

This is the recap for Season 4, Episode 2 “Leeting Go.” The full episode is embedded below for as long as MTV keeps it up.

Amber
We open with a black screen and Gary’s 911 call after Amber threatened to hang herself, a touching shot of Gary holding Leah, and then a cut to Season’s Recovery Center where Amber received treatment last year.

We see Amber in treatment, and in a rare event, make-up free. (She does appear to have a new micro dermal piercing at her temple.) In voice-over she tells us how she was put on suicide watch at the hospital, and that she’s been in treatment for 12 days. We see a therapy session where she says that she’s angry and confused, and then breaks down. The therapists asks Amber to be “present,” and puts her hand on Amber’s abdomen, and then Amber opens up about how she felt when she wanted to kill herself. “I just wanted to go,” she admits, and the therapist points out “If you really wanted to go, you would have gone.”

It’s all therapy sessions for Amber this episode, and next we see her with a different therapist, Amber talks about how she’s good at holding in pain because that how she coped as a kid with a tumultuous home life. Her pain relief thus far has been “only when I have really good pain medication.” The therapist tells Amber that she can do it differently to stop the cycle, and she breaks about worries that Leah will forget her.

Amber then has punching therapy (that she desperately needs) and talks more about her daughter and her progress. When we see her next, she’s wearing makeup and looks relaxed and says she feels “well taken care of” at Season’s because of the love in everyone’s eyes when they talk to her. They let her feel comfortable being who she is, something she has desperately wanted. She talks to the therapist about not feeling well the day before because she was coming down from medication, and says she’s been self-medicating since she was around 14, (earlier this year she told Reality Weekly she started abusing prescription pills at 13.)

Gary gets called for some deep, intensive therapy with Amber. Amber walks up to the therapist while he’s on the phone with Gary, and she gets to hear Leah tell her she’s pooped in the potty!

Catelynn and Tyler arrive in New York for their second annual visit with Carly, and they’ve previously discussed how these visits will just keep getting better and better. April continues her turn of support for Catelynn and Tyler’s decision by texting Catelynn that she’s excited for them. When it’s finally time to see Carly again, the audience gets a lovely montage, but no video footage, which makes sense. Given the circumstances, Brandon and Teresa have been extremely giving not just with Catelynn and Tyler, but with the whole world. At some point it makes sense that they would want to step back from the cameras. Catelynn and Tyler process their visit, and have a tearful moment. Even though it hurts a lot, they still think they made the right decision. It’s hard not to get a little broken up watching them.

Maci has a speaking event (Catelynn, Tyler, and Farrah also often do these kinds of things) and so she needs Ryan to pick up Bentley earlier than usual. Ryan’s not excited about that prospect, or Maci’s timing with the request.

Ryan later has lunch with friends, and talks about his new classes, and their recent snappy phone call over picking Bentley up early. When the friend inquires what Maci had going on that was so urgent, Ryan replied “That speaking thing. She goes to a high school and tells little girls not to have sex, but yet she lives with someone in her house.”

Meanwhile, at Maci’s house, she gets into a fight with Kyle over asking Ryan to pick up Bentley, and it escalates after Kyle calls Maci an “idiot.” Maci asks Kyle to leave because she says she left her relationship with Ryan over name calling, and he goes back to Nashville, despite Bentley’s pleading.

Later, Maci makes Bentley leave a message for Kyle asking him to come back because both he and mommy misses him. Without Kyle to take Bentley to day care, Maci takes Bentley to her mom’s house before her flight.

Kyle comes back to talk things over with Maci. They argue over whether or not Kyle’s sorry she was mad, or sorry she he called her an idiot. Maci explains that when Kyle does things like call her an idiot it reminds her of Ryan so much that she wants to kill him, especially because he’s usually so unlike Ryan. Kyle demands a hug and playfully calls her an “idiot,” again.

Farrah
Farrah’s mom Debra is watching Sophia while Farrah packs, then Farrah meets with Debra and dad Michael to tell them her plan: Michael is going to help Farrah pack her U-Haul, and then she wants him to drive the U-Haul from Council Bluffs, Iowa to Miami, Florida. No problem, right?

Debra cradles Sophia and tears up as she tells Farrah how she told Sophia that they were moving away. Farrah angrily tells her mom to “stop making it sad!” Farrah goes on to say that she tries to keep Sophia away from herself when she’s feeling depressed, so her mom should do the same. That’s a good point, but she negates it by being angry, which can be just as stressful on the child as sadness. Plus, every child needs to be exposed to some emotion so they understand that it’s okay to feel certain ways sometimes.

Michael shows up to help Farrah move, and the editing definitely highlights Farrah being short with him (click here to find out why Farrah calls her dad by his first name.) Farrah does help Michael carry a couch.

With Michael gone, Farrah, Debra, and Sophia go out to eat and Debra orders the “Farrah wine.” After another bitter interchange, Debra not-so-subtly tells the waiter that the Farrah wine is “vinegary.” Farrah takes the metaphoric zing in a huff.

On Sophia’s dad Derek’s birthday, Farrah takes Sophia to his grave site. Farrah really opens up to Derek at his grave, and really lets the emotion roll over her as she deals with the fact that he died way too young. She wishes they could have spent more time together, or maybe even gotten married. When Sophia wanders over, a tearful-but-hopeful Farrah apologies to Sophia for being sad, and then smiles and tells her to say goodbye to her daddy. This was a very moving and sweet scene for Farrah.

Later we see Debra drop Farrah and Sophia off at the airport to begin their new life in Florida.