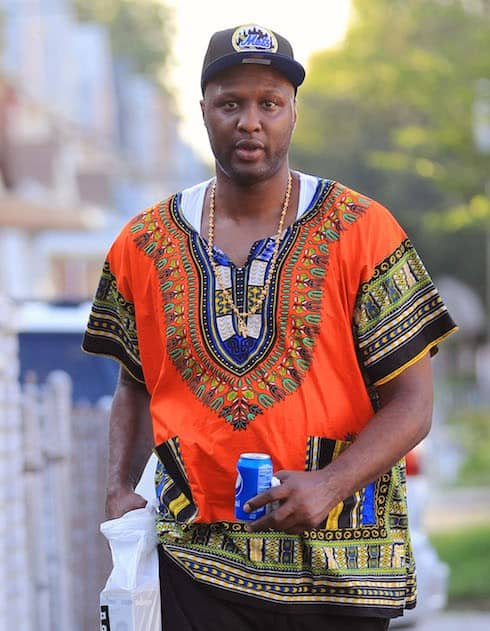 The latest Lamar Odom update brings a tale of wild, almost limitless partying, even as Lamar himself appears to be ready to cease his wild ways and try to get right with a stint in rehab. At least one Kardashian–momager Kris Jenner–is supposedly in Lamar’s corner, but his estranged wife Khloe Kardashian has reportedly had it with the troubled former NBA star, and doesn’t care what he does next.

Indeed, the last few weeks have been a relentless back-and-forth for Odom, who alternately makes headlines for over-the-top binges and sweet playdates with his kids. His back-and-forth with Khloe reached a head last week after the most recent filing of divorce paperwork left Lamar technically homeless.

Since then, it looks like things might have gotten a lot worse, potentially. For example, the photographer’s caption for the image above reads as follows: “Lamar Odom wears the same outfit the third day in a row, with a Modell’s shopping bag with tank tops in it, after being pictured in it at a strip club on the night of July 11, 2016 in Queens, NY.” A brand-new Lamar Odom update from E! reflects that: it was a “wild week of strip clubs and airplane drama” for Lamar, according to the Kardashians’ home network. Most of his nights back east have seen Lamar visit multiple standard clubs, as well as a bevy of strip clubs: the three days that followed Lamar’s drunken, vomitous ejection from a Delta flight headed to NYC saw him hit up a total of six different venues.

According to E!’s report, Lamar was jovial, and often posed for photographs with fans. An onlooker at the Playroom Lounge noted that Lamar “was very friendly and took pictures,” and a promoter at Mia Sushi and Steakhouse–which turns into a strip club after 11 PM–said Lamar “just sat, hung out and listened to the music….He really liked it.”

But Khloe Kardashian has allegedly had it with her soon-to-be-ex husband. A new Inquisitr report states that, though Lamar “wants to be sober,” she has apparently turned her back on him and begun dating R&B hitmaker Trey Songz. At one point, Khloe reportedly had an “intense” desire to “save” Lamar, and at one point “hired private investigators to keep an eye on him.”

Those days appear to be over, however. Kris Jenner is the only member of the extended Kardashian family who has reached out publicly since the plane incident, and did so tenderly, telling an interviewer that she only “wants the very best for him.”

“I don’t know what happened,” she explained, while a guest on Australian radio show “Kyle & Jackie O.” “I am looking at this like you guys are looking at this, and it was a big surprise to me. I still don’t know what happened….You just want the best for anyone that you love and I think that what I have learned through all of this is that anybody who has struggled with addiction – it’s a disease and I’ve learned a lot. It’s been unfortunately a great education. Quite the eye-opening experience.

“He’s like my son,” Kris concluded. “He’s a part of my family and I adore him. He’s the best. He’s the greatest guy in the world and anybody that knows him will tell you the same thing.”