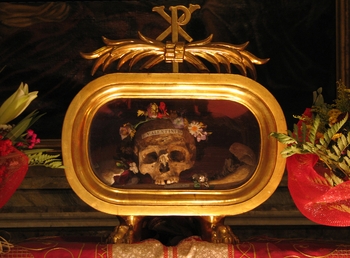 Valentine’s Day as we know it now is very bittersweet: Sweet if you’ve got a generous crush/love and/or lots of friends to shower you with gifts, cards, emails, tweets, flowers, and candy, until you’re swimming in red and pink colored flattery. It’s also sweet if you’re a pop star who spends Valentine’s Day with a dying fan.

But it’s also very bitter, for those who think it’s just another cynical holiday meant to sell candy and cards, and of course, if you’re not linked up to anyone romantically during this time, it just seems like everyone who is is just rubbing it in your face. That girl at work that keeps getting flowers delivered. That kid at school with ALL the candygrams. Your best friend/sister/mortal enemy and her reservations at the poshest spot in town with her fiance (who’s in finance, looks like George Clooney, and loves puppies.) Really, it’s kind of sadistic when you think about it.

So, how did this wretched/wonderful holiday come about? It turns out the history of Valentine’s day is even more brutal than finding an empty Valentine’s cubby in elementary school.

It’s also kind of all over the place, and there are all kinds of weirdness going on here, but the beginnings started with The Romans (those crazy Romans!) From Feb. 13 to 15 the ancient Romans celebrated the feast of Lupercalia, to ward off evil spirits and enhance the health of the community. The name came from Greek λύκος — lukos, and Latin lupus, meaning wolf. In Roman mythology, Lupercus is the god of shepherds. His festival took place on February 15, and celebrated the founding of his temple. It was also partly known as “Wolf Festival” because it honored Lupa, a legendary she-wolf who suckled infant orphans.

The (drunken) festival began with the sacrifice of two male goats and a dog. A feast followed, and they made thongs out of the skins of the sacrificial animals, called Februa, which gives February it’s infuriatingly spelled name!

Lupercalia also had strange and brutal mating practices. Young women would line up for men to beat them, and then the men would draw the names of girls from a jar. The name they picked would be their sexual partner for the rest of the festival (and longer, if it was a good match.) (The actually kind of sounds a tad like The Bachelor.)

The Roman populace still continued to celebrate Lupercalia even after pagan rituals were outlawed in 5th century A.D. Rome. That century Pope Gelasius I established Valentine’s Day at the same time of Lupercalia to honor two martyred Christian priests named Valentine (they actually may have been the same guy, more on that later.) Around that time the Normans (Norse) also had a day, called Galatin’s Day (that’s right, Leslie Knope didn’t make this one up,) which celebrated the love of women. To further confuse things, the “G” in Norse is pronounced “V” in English. It seems like Lupercalia, St. Valentine’s Day, and Galatin’s Day all kind of got meshed together.

1. Valentine of Rome – During the third century Roman emperor Claudius Gothicus – known as Claudius the Cruel, had abolished marriage because he felt marriage and family life was preventing people from joining the military. Priest Valentine of Rome was discovered illegally marrying people. Before he was clubbed, stoned and decapitated on February 14, 269 A.D. legend says he fell in love with his jailer’s daughter, Julia, and left her a parting note signed “From your Valentine.” In some stories, Julia was blind, and he cured her sight. His skull, adorned with flowers, (pictured above) is currently displayed at the Santa Maria in Cosmedin in Rome Italy.

2. Saint Valentine of Terni – He was also executed on February 14, but on a different year, though some scholars believe Valentine of Terni is the same man as Valentine of Rome. Terni’s story is that he championed the validity of Jesus, and is said to have restored the sight of a blind girl (St. Valentine of Rome is also rumored to have restored the sight of the girl he loved.) At that time, it was illegal in Rome to practice Christianity (Emperor Claudius again), and he was eventually arrested. Claudius initially took a liking to him, but had Valentine put to death when he tried to convert Claudius to Christianity.

Is there a Kardashian family church? Religious endeavors raise eyebrows