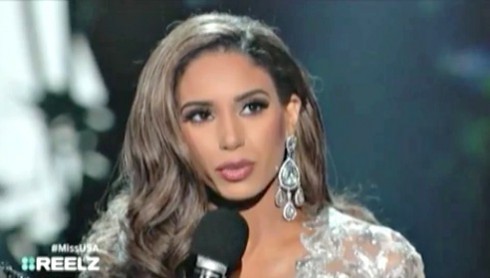 Despite scrambling to find a new TV home and new hosts because of Donald Trump’s comments on Mexican immigrants, the Miss USA competition went off without a hitch on Sunday night — except for a few contestants during the Q&A segment.

Miss Texas, Ylianna Guerra, fared pretty well when asked whether there should be salary caps on company executives: “If you work hard enough, you can attain anything. This is the land of opportunity and CEOs — I believe they work hard enough for their money, so I believe they should be able to attain whatever it is they’re working for.” But things went south when she was asked which woman should appear on the $10 bill.

“On the bills that we have right now, they are all of presidents. So, I think we should just wait until the upcoming election when we have both a Republican and Democratic party candidate running for president. So, I think we should just wait and see.” Besides the bad suggestion, she’s wrong about just having former presidents on the bills. (Alexander Hamilton, anyone?) There’s also a very strict rule about only using deceased people on U.S. currency.

You guys I can’t with this!!! Read the question to which this is her answer #MissUSA pic.twitter.com/zDsKLNxDJP

Miss Rhode Island, Anea Garcia, was asked whether political correctness is hurting or helping our country. She replied, “That’s a very good question. I think it’s a balance of both. We definitely need….I’m sorry, will you please repeat the question once more?”

When it was repeated, she started off with the same answer and then added, “We need the people to remind us, especially politicians to remind us, when to do right and when to do wrong and…”

Then–mercifully–she was foiled by the buzzer.

Perhaps the biggest stumble came from Miss Nevada, Brittany McGowan, who was asked, “What would you do to improve race relations in the U.S.? Please be specific.”

McGowan responded, “What I would do to improve race relations in the U.S. is get more racist groups together and be able to be with each other in a non…” After freezing for a few seconds, she concluded, “We need to be more accepting of each other and we need to bring people together.”

Miss Oklahoma, Olivia Jordan, who answered aptly her question about what challenge our country needs to tackle, was ultimately crowned the winner.