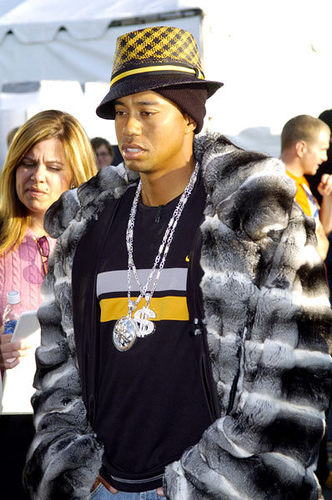 I was doing some Tiger Woods research (imagine that) when I ran across this image. At first I thought it was a Photoshop joke, but after looking into it I discovered it’s completely legit!

Apparently Tiger Woods and Snoop Dogg switched roles for a day back in 2005. Snoop played golf at the US Open and Tiger Woods recorded two rap tracks in Snoop’s studio. As proof, here are a couple more photos from the event: 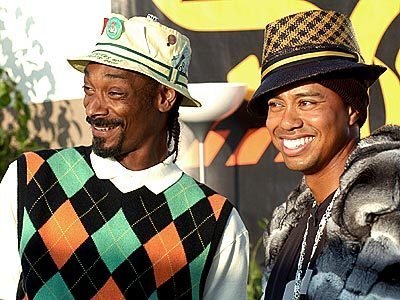 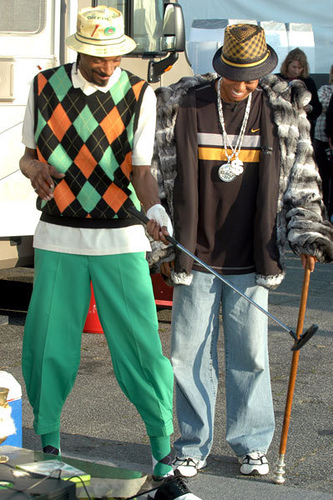 Playahata.com had these quotes from Tiger about trying his hat as a rap artist with such a squeaky clean image:

“Beeyatches had better recognize my game, and I don’t mean golf,” said Woods, fully pimped out in clothing from Snoop’s closet. “If I can get good grades in English Literature, then I can certainly flow about some African Americans and wh**es on a musical track … Plus, people don’t really know that I have always wanted to say the word ‘b**h’ in public, so people will stop thinking I’m some kind of nerd. When they hear my new rap record, I think people will be surprised.”

Not a problem any more! Obviously Tiger has since embraced the playa identity! I suppose the next thing we’re going to find out is that Snoop Dogg is secretly a world class golfer?

Anyway, Tiger needs to just give up on the “squeaky clean” thing – that’s over now – and commit to to the new Tiger. First, he needs to change his name and then he should follow up his two singles with an entire rap album. Ooooo – it could be a concept rap album where every song title is the name of one of his beeyatches! Here’s my guess of what it would look like: 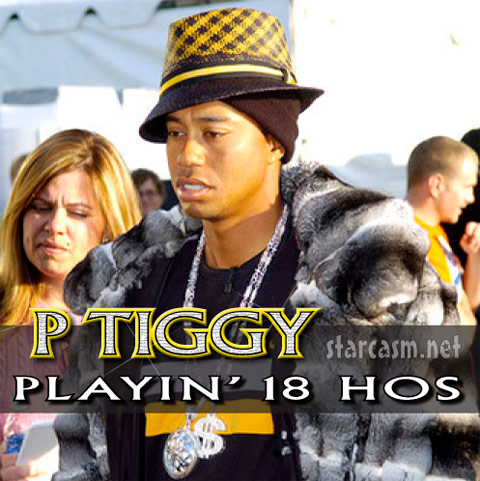 To be honest, I think ol’ P Tiggy is still nerdy and it’s probably going to turn out sounding like our decade’s version of DJ Jazzy Jeff and the Fresh Prince – but it would definitely give us a lot of material for funny posts!

Tiger Woods Mistresses Scorecard with photos and bios of all the women so far!