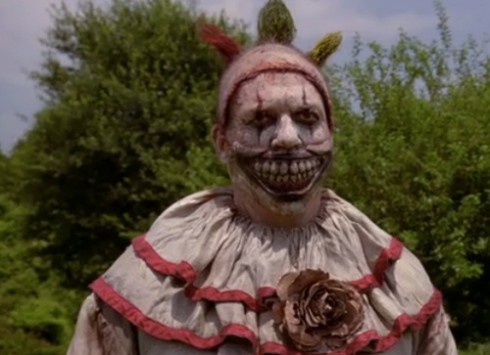 There’s no argument that the scariest, most freakish element of American Horror Story: Freak Show, is the murderous Twisty the Clown, played by an unrecognizable John Carroll Lynch. Series creator Ryan Murphy has revealed some pseudo-spoilers for the series, including a little insight on the clown of our nightmares.

Ryan Murphy has said when we find out more about Twisty’s backstory in Episode 4, we’ll also learn what’s behind that disturbing mask.

When they decided to deal with clowns, they wanted to go all the ways and exploit the dark association clowns have garnered over time. “We said in the writer’s room that if we were going to do clowns, we were going to create the most terrifying clown of all time,” Murphy told BuzzFeed News in September. “That was our goal when we were writing him, but I’m worried about people being too afraid of our clown. It’s heart-stopping what he does. I’m worried. I’m worried that people are going to have cardiac arrests… The clown’s intro in the first episode is … even I was terrified of it. It’s brutal. Two crew members told me they have had nightmares about this clown since we started shooting and they’re not even scared of clowns. I think he’s pretty extraordinary because, when you see why he’s a clown and why he’s wearing the mask … just you wait.”

The episode when we learn more about Twisty is “somewhat based on an urban myth,” but what myth is it? There are, of course, the real life exploits of serial killer John Wayne Gacy, and the fictional terrors of Stephen King’s It, but there is also a myth that’s been circulating in some form since the 60s about a babysitter who sees a scary clown statue in the house she’s babysitting. She calls the parents to ask if she can cover up the statue because it’s making her nervous, and they reply that they don’t have a clown statue. After hearing that, the babysitter runs out of the house, and in some versions he’s already killed the children, while in others, everyone is safe and the cops catching the clown escaping.

Of course, we’ll just have to wait and see which urban legend Murphy’s talking about, but one things for sure: they succeeded in somehow making clowns more creepy than ever.

How much do the Naked And Afraid contestants get paid for doing the show?