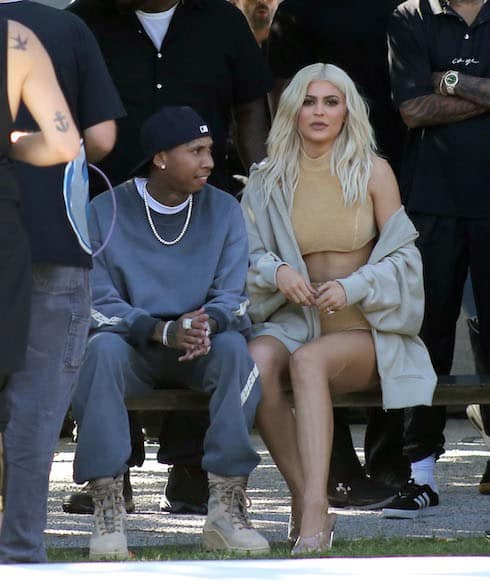 Did Tyga propose to Kylie? Rumors about the two continue to fly–and they’ve gotten so serious that the rest of Kylie’s family has reportedly planned an honest-to-God intervention to help 19-year-old Kylie kick her inexplicable addiction to the 26-year-old Tygster. It wouldn’t be the first time that the family banded together to try and rid itself of Tyga; it was only a few months ago that Kim Kardashian and Blac Chyna allegedly teamed up to try and keep Kylie from going back to him, after Kylie dumped Tyga for the third time. They were unsuccessful then…and only time will tell if their second, more forceful attempt, will take.

What set the Kardashian family off, you ask? It’s just speculation, but in the past month, Kylie spent $200,000 on fines and court fees for Tyga–on her birthday, no less–to keep a former landlord from having him arrested. She also apparently married him in secret, in order to help his custody case against ex-flame Blac Chyna, with whom he shares a son, King Cairo. Most recently, Kylie dropped $300,000 on a new Bentley for Tyga, following the repossession of his Ferrari. (Kylie claims that she surprised Tyga with a fake respossession in order to set up the surprise, but conflicting reports about her version of events suggest that she may have bought him the Bentley to try and cover up the initial story.)

Given all that, it’s perhaps unsurprising that Hollywood Life is now reporting the Kardashians are set to stage an anti-Tyga intervention for Kylie’s benefit. Beyond the continuing money problems, there’s the issue of Tyga apparently manipulating Kylie’s self-esteem. This may include urging her to undergo plastic surgery several times: “[He] constantly feeds into her insecurity about her looks by comparing her to her sisters,” the site’s insider claims. “This fixation is taking over Kylie’s life….[The family has] become very, very concerned, especially Caitlyn. She’s talking about confronting Kylie. Kris, too, realizes something needs to be done.”

In fact, the pair are already in New York City for the big event, and have already been spotted “packing on the PDA.” Kylie and Tyga took in Kanye West’s Madison Square Garden concert on Tuesday night, before stepping out all over each other (Tyga’s Instagram update above was snapped shortly after the show ended). “Tyga nuzzled his girlfriend’s neck from behind,” reported the Daily Mail, and the pair were “joined at the hip as they cosied up [together].”