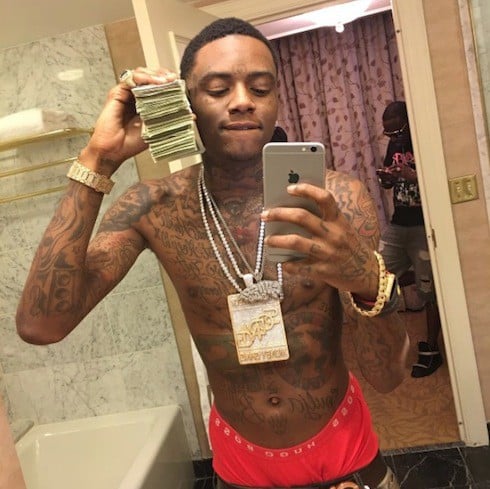 Does Soulja Boy have a kid? According to the man himself, it is decidedly so: the Love & Hip Hop Hollywood star recently raised eyebrows by tweeting out that he’s about to become a father.

The news wasn’t entirely surprising for LHHH devoteés, who recalled that Soulja Boy also tweeted out, about nine months ago, that he was expecting a child. In the update, Soulja, real name DeAndre Cortez Way, certainly sounds every bit the proud papa-to-be…

My son will be born soon. Nothing else matters.

…but what’s less certain is still the identity of Soulja Boy’s baby mama. Except to say that we know it isn’t his Love & Hip Hop Hollywood co-star (and current girlfriend) Nia Riley, whose most recent full-body Instagram shots make it clear she’s not in the third trimester of anything:

LOVE this coverup/dress I wore out lastnight from @fauxxhouse boutique! Follow them for Womans apparel, nails, hair and makeup ??? !

Nia has yet to respond to Soulja’s news via Twitter, Instagram, or back channels. In fact, it’s possible that Nia and Soulja aren’t on the best of terms at the moment, given that the last time they were in headlines together it was because Soulja thought Nia was cheating on him and threatened to kill the alleged boyfriend. (The whole thing turned out to be a misunderstanding.)

Regardless: congratulations to Soulja, the mystery woman, and the baby-to-be!

LHHH Are Soulja Boy and Nia Riley together? He insults her vagina for all the world to see

(Photo credits: Does Soulja Boy have a kid via Instagram)

RHONY: Is Ramona Singer’s husband Mario cheating on her?