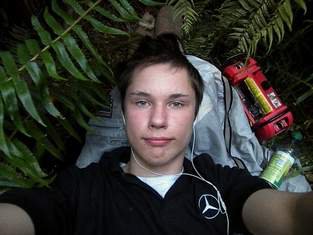 The “Barefoot Bandit” Colton Harris-Moore’s two-year fugitive run and major stealing spree came to an end in the Bahamas this morning, but his Hollywood story has just begun. His mother Pam Kohler has a book deal, and has been working with entertainment lawyers and Hollywood producers to sell the rights to his story for months.

The 19-year-old has been evading the police since 2008, when he escaped a Washington State halfway house where he was beginning a four-year juvenile detention sentence for squatting.

Since he fled state custody he achieved fame through successfully staying one step ahead of the police an pulling off a string of  heists: stealing cars and boats, and allegedly flying about five airplanes without a pilot’s license or training. His Facebook fan page has nearly 10,000 followers (down from 27,000 a few months ago) with comments asking him to “call me,” “rob me,” and “teach me your methods.” Many are romanced by the modern John Dillinger, even purchasing T-shirts in Seattle and on the Internet emblazoned with “Fly, Colton, Fly!”

Police finally nabbed him on a boat in Harbor Island off of Eleuthera, Bahamas. They caught on to his trail after allegedly committed a string of break-ins and then crash-landed a plane on a nearby-island. Harris-Moore had a hand-gun when he was discovered on the boat and shots were fired during the water chase.

Colton-Moore was first arrested at the tender age of 12 for possession of stolen property, and is currently linked through evidence including DNA to nearly 50 burglaries in Washington State ranging from boats and planes to delis, homes, hardware stores, and attempts to rob ATM machines.

Here’s a video from The Bandit’s