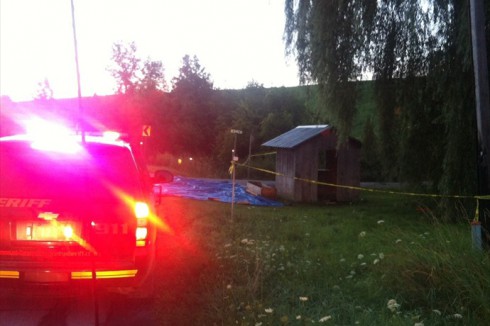 After calling an official Amber Alert at 10:44 last night, road blockages were set up as nearly 50 officers searched for Delila Miller, 6, and Fannie Miller, 12. The search continues this morning.

State police told WSYR the two young girls were working at their family’s roadside stand Oswegatchie when a neighbor saw them interact with a driver of a 4-door, white sedan. The witness said a passenger in the car threw something in the back and then climbed into the backseat. When the car left moments later, the two girls were gone.

Only one of the girls is believed to know English. Both speak Pennsylvania Dutch. They are described as…

Fannie Miller, 12: A white female with brown hair and brown eyes. She is approximately 5 ft. tall and weighs about 90 pounds. Fannie was last seen wearing dark blue dress with blue apron and black bonnet. She is cross-eyed.

Delila Miller, 6: A while female with brown hair and brown eyes. She is approximately 4 ft. tall and weighs about 50 pounds. Delila was last seen wearing dark blue dress with blue apron and black bonnet. She has round scar on forehead and is missing front teeth.

St. Lawrence County Undersheriff Scott Bonno said as many as seven law enforcement agencies, including the FBI, are working the case.

“It’s a scant trail,” Undersheriff Scott Bonno told WWNY. “We don’t have a lot of good leads, but you begin to utilize logic. We’re going to start looking at sex offenders in the community, just to eliminate them as suspects, if nothing else.”