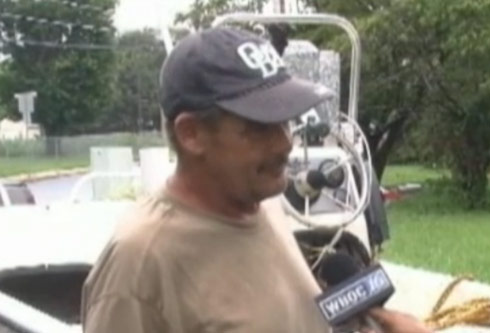 John Franklin Riggs and sister Contessa L. Riggs faced a do or die situation when their boat capsized Tuesday during a storm off the coast of Deal Island, Maryland. They, along with their 70-year-old father, Contessa’s 9-year-old niece and 3-year-old son, had been treading water for over an hour and they knew no other boats would be coming.

“John and I looked at each other and he said, ‘Should I try it?’ I knew he was talking about swimming to shore. So I told him to try it. But we had no idea if he would make it to shore.”

The sun had set by the time that John started off. He swam for 5 hours and managed to find land at around 1 a.m. When John made it to the shore he was so fatigued that he was unable to walk so he crawled to the nearest house. Some good fortune struck, as the residence had dogs which barked and alerted the homeowner, Carol Wood, who immediately contacted the local fire chief.

As John was managing to get help, Contessa was still back at the boat with her family unsure if John had made it or if anyone was coming to rescue them.

“It was absolutely horrible. Our legs were getting stung over and over again by the jellyfish. We had cuts and bruises. My son was crying. Waves kept crashing over our heads.”

The fate of the family and impossible choices started circling in her mind as hope dimmed:

“He [father] had been in the water the longest. And I realized that if anything happened to him, I’d have to choose between helping him and leaving the kids and staying with the kids. It was such a hard choice to make peace with. I kept saying, ‘They’re coming for us, we’re going to get rescued, don’t worry.’ We talked about stupid things like eating ice cream and watching movies.”

The first responders arrived and all of the family is said to be doing well with no significant injuries.

Contessa hugged her brother John when they were reunited and told him he was her hero. Even in such a harrowing circumstance, she managed to take in some of the magnificence of the surroundings. “There were some very beautiful moments in the water. We were terrified, but the sky had never been clearer and we could see all the stars in the Milky Way. The water was glowing blue with the flourescent jelly fish,” she said.