If you’re like me then you’re probably spending your Friday night angrily drinking beer, cursing, and kicking inanimate objects because you weren’t able to make it down to Ft. Lauderdale to meet and greet the “Backdoor Teen Mom” herself, Farrah Abraham, at the 2013 Exxxotica expo. But not everyone was so unlucky, and thanks to those blessed folks we’re able to catch a glimpse at what it must have been like to stop by the VividCeleb.com booth and chat it up with Farrahmazing and even pose for a photo (for $20).

The two photos above were shared by Exxotica’s official Facebook page and in them the birthday girl (Farrah turns 22 today y’all!) looks like she’s having a great time.

Here’s a photo of Farrah at her booth holding one of her videos tweeted by @Jman5245 with the caption, “The controversial Teen Mom Superstar @F1abraham appearing @EXXXOTICA”

And just in case you were planning on seeing Farrah at the expo tomorrow and are wondering where her booth is – you can’t miss it because it is front ad center, right under the “Club Spotlight” banner in the bottom of this photo from the Exxotica Facebook page:

The most diligent Farrahporter so far has been @DrunkenStepfather, who seems to be just as enamored with Farrah as we are – only with a slightly less restrained vocabulary. The next batch of photos and videos are all from him.

Here are all the Farrarazzi waiting for her arrival:

And Farrah waiting for the arrival of her fans:

@f1abraham I hear crickets but think people are just intimidated by your success twitter.com/drunkstepfathe…

Here’s a hilarious Vine clip of Farrah doing what most young women should do — avoiding a drunken stepfather:

That one was captioned “@f1abraham why you running Away from me?” This next one was accompanied by, “@tmz it only costs 20 dollars to have your picture with @f1abraham”

This next photo was apparently taken after Farrah “just rejected a girl who wanted to take a pic of her” according to the tweet:

I was wondering what the reaction would be to Farrah getting top billing at the expo from those in the adult film industry, and I think this tweet from @porncummunity pretty much sums it up:

farrah is getting some publicity and gate sales into exxxotica/afterparties so if you bump into her try be nice or look the other way meh :/

Stay tuned! If there are any photos from Farrah Abraham hosting the official Exxxotica after party at Passion night club later otnight we’ll try to add those too! Oh… Happy birthday Farrah! And congrats on not going to jail!

UPDATE – Here’s a photo of Farrah Abraham at the Passion night club Exxxotica after party tweeted by Farrah herself along with the caption, “Passion all night @HardRock” 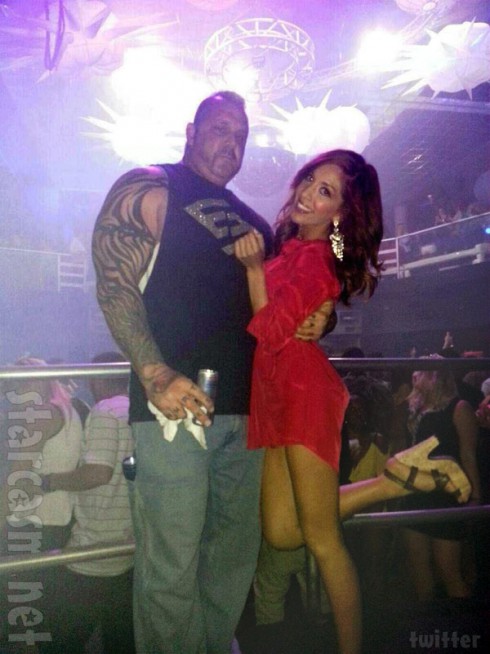 Farrah also posted a video on Keek when she got home to let everyone know (very, er, drowsily) that she wasn’t getting any birthday sex. Here’s the clip followed by a transcript of what she says:

So it is 2:30 AM keekers and guess what? I was just at a f***ing Passion night club at Hard Rock for my 22nd, and you know what? This girl ain’t gettin’ birthday sex. This girl had too much fun with real women and — just enjoyed the night. And I think that just shows how f***ing grown up I am. I’m over men. Let’s be about ourselves and let’s have fun. So thanks for letting me have a wonderful birthday. Bye!

UPDATE – And here’s another Keek video from Farrah on the second day of Exxxotica as well as a video piece on the opening of the expo done by NBC Miami that includes Farrah:

“Today I’m just signing videos for people who would like to have a signature by me and embracing my fan base in another genre,” Farrah says in the clip.

MTV did not fire Amber Portwood, continues filming her for next season