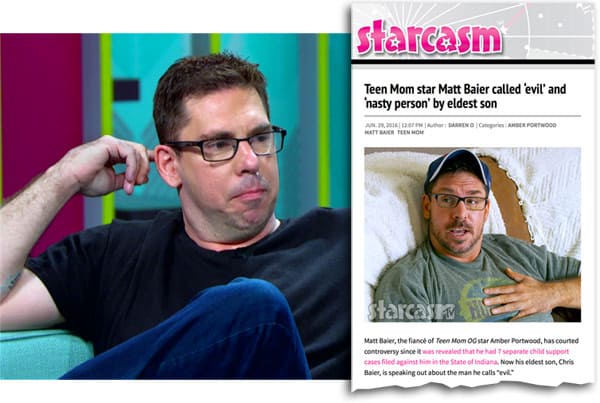 Amber Portwood’s much maligned fiance Matt Baier is no stranger to negative comments made about him, and the 45-year-old reality star’s usual response is no response at all. But, when an article came out yesterday in which his very own son called him “evil” and a “con man,” Matt felt he needed to speak out and explain why his son would say those things.

[This post includes an update at the bottom that you won’t want to miss!]

“What actually happened is he was contacted by the press numerous times in the last six moths or so and offered money to say bad things about me,” Matt tells Real Mr. Housewife. “Him and I talked about this and he contacted me about it.” He adds that the money offer was especially enticing for his son because of a serious drug addiction:

It’s important to note my son has a bad drug addiction, and he was completely strung out when he started talking about six months ago. He was in trouble with the law and in between places to live. When you’re offered an amount of money by anybody when you’re in that situation it’s really tough to turn down. 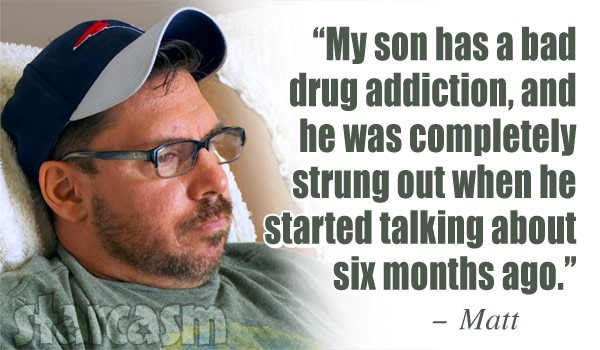 Initially, Matt’s son, 26-year-old Chris Baier, remained silent and refused to say anything negative about his father. “Dad, look. They’re offering me this money,” Chris reportedly told Matt. “I told them I don’t have anything bad to say towards you. I’m not going to talk to them.”

Matt says that Chris was going through an extremely bad time in his life at the time, and he reveals that he and Amber had offered to help him get his life on track. “Being what we’ve been through in life,” Matt says, “we’re kind of the perfect people to guide him in the right direction.”

Unfortunately, Chris was not receptive to the helping hand offered by Matt and Amber. Matt says Chris basically fell off the radar and did not respond to calls or texts.

The next thing Matt knew, there was this article on Radar Online in which Chris went off. “I hate that man, for everything he is and isn’t,” Chris told the site. He even claimed that Matt used his son’s drug addiction as a resource to fake his own history with addiction in order to impress and bond with Amber. “He asked me to tell him all about my problems with drugs. When I saw him on MTV, he was talking about all of my drug problems that I told him about, and made believe they were his problems,” Chris claims. “The truth of the matter is, he’s an evil, evil man, and when he did evil things, he was stone cold sober.” Chris added: “All he does is use people and hurt them. He’s a horrible, nasty person, the ultimate con artist.”

[We spoke with Matt at length last year about his history of drug abuse – you can read that here. However, I feel I should point out that several of the women from Matt’s past who have spoken out about their experiences with him have also said they never saw any indication that he had a drug problem, and that he never mentioned having one in the past. That did seem odd given that Matt was VERY open about other personal issue from his past, like being abused as a child, as he talked about in his book Guys Don’t Rat On Guys.]

So what happened?! Why would Chris go from being so supportive of his dad to annihilating him in the press? Matt called Chris’s mother and she said their son was “very, very high a few months ago” when he talked with reporters. She says the Radar Online article was a result of those conversations “when he was really strung out.”

Matt says that since that time his son Chris is “clean and has a job and a new apartment.” Matt adds that he is not upset about what Chris said, but he is upset about how it all went down. “I love my son. This article doesn’t upset me, as it will pass and it won’t hurt me; rather, it upsets me he was in a vulnerable place in his life and manipulated.” He adds: “I love my son unconditionally and I have no anger towards him, but it makes me sad that the press is talking to people who basically are out for/want/need money.”

Matt also figured that since he was speaking out about his son’s comments, that he might as well go ahead and answer the question every one seems to want to know the answer to: Is he still with Amber Portwood? Are they still planning to get married in October? 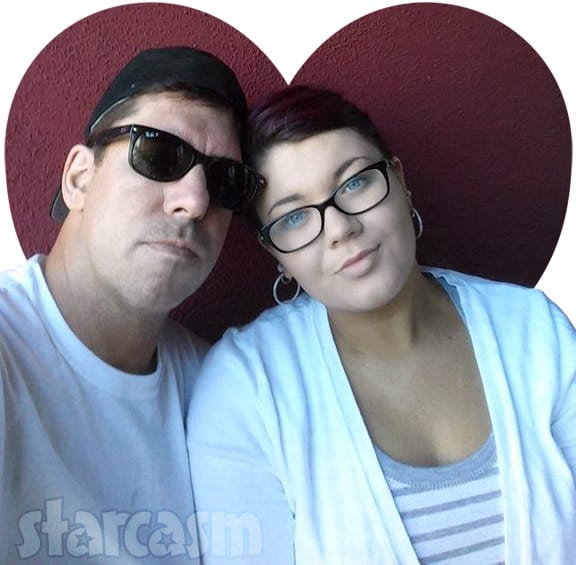 “Amber and I are doing well and have never been in a better place together,” Matt reveals. “We are continuing to look forward to our wedding and spending the rest of our lives together.”

UPDATE – This story just keeps going! After Matt’s response was posted, The Ashley’s Reality Roundup spoke with the author of the Radar Online article, Donna Thomas, who basically discounted all of Matt’s claims. “Chris hasn’t used in years!” Donna says of Chris allegedly being strung out when he did the interview. “He wasn’t paid a dime, and wasn’t looking for money, he’s a really nice kid…He’s had some issues with drugs, but it’s the past, he has a good job, and a girlfriend and he’s on the right track, he doesn’t want Matt to destroy anyone else, that’s all!”

Donna adds that she spoke with Chris in late May/early June, not six months ago as alleged by Matt. “Everything that Matt says is a lie,” Donna tells The Ashley. “I highly doubt he’s talking to [Chris’ mom and his ex-wife] Sarah… As of early this month, he hasn’t had any contact with her in decades!”

Meanwhile, Real Mr. Housewife spoke with Matt after Donna’s comments were published and his response was: “I just know what Chris told me and on our end it’s a dead issue. Chris and I are great.”

UPDATE – Amber Portwood took to Twitter for her reaction, which didn’t address Chris’s comments about his father, but instead called out Radar Online for paying him — which the author of the post says wasn’t the case:

@TheAshleysRR Matt also talks to his mom as well. So crazy

Amber then went on a rant calling out media outlets for not reporting on the child support cases filed against Matt that were dropped:

Has anyone heard about how all the child support cases were dropped!! You ignorant trolls need to listen to a real one for once.

And we sit back and laugh..flip our houses and love our life?

Where's the article about the child support cases dropped. Where's all these women at?? Bring it!! We will always keep moving forward???