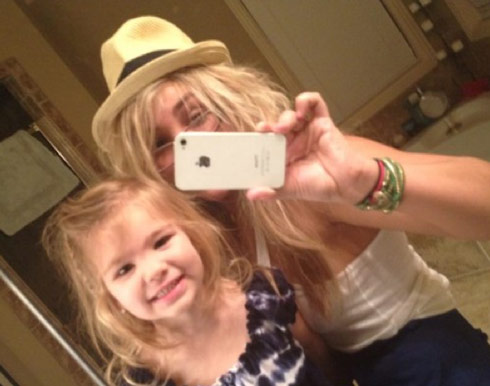 Long before the show 16 & Pregnant forever changed the television landscape Jamie Lynn Spears was the fierce target of the tabloid universe for being just that. In a recent interview with Glamour, the now 20-year-old (thanks megan) discusses that crazy time and how she’s evolved and matured in the process.

It’s a great 3-page-piece in which Jamie presents somewhat of an open letter about the moments when she was just a kid that changed her life forever.

It was 2007. I had been on a Nickelodeon show, Zoey 101, and after we wrapped shooting, I just wanted to go home to Louisiana and finish high school, be a cheerleader, all that. Then I found out I was pregnant [by then- boyfriend Casey Aldridge]. I was 16. I’d had one boyfriend. It doesn’t make it perfect or all right. But I was judged for something that probably most everyone does. I was young. I was in love. I was like every other teenager, except I had this last name. And I made a decision that is forever my decision.

Casey was my first love. Since the day I saw him, I just wanted to marry him and be with him forever and ever. I believe in safety and birth control as prevention. But like many young girls…I was really scared to go to the doctor. And I was on a Nickelodeon show, and it [felt] especially embarrassing to ask someone to put me on birth control. I didn’t want to ask my doctor, because she had a little girl.

Jamie Lynn then addressed how at the time the tabloids were relentless, as I’m sure the girls from Teen Mom can relate, and that they twisted her reality as one that was glorifying teen pregnancy (heard that one before). Because of this harsh spotlight she decided to move back to Louisiana to raise her daughter Maddie.

Then Jamie addresses the show Teen Mom in detail and her excitement at the prospect:

When I saw MTV’s Teen Mom was coming out, I remember thinking, Oh my God, I cannot wait to see this show because there’s someone else out there. I mean, I feel for those girls. I’ve been that girl. It does show that motherhood is hard. There were so many times—especially when Maddie would get sick—when I would cry to myself and think, I really don’t know what to do. It takes bravery to be a young mom, and it does take bravery to let the world watch.

I’ve been on dates here and there, going to dinner or a movie, but nothing further than that. I’m a mother first. I have a little girl, and until I’m serious about someone, he’s not going to be around her. I’m not going to say, “Come to the house, and let’s watch a movie,” because I have Maddie there. The one thing that does get me excited is one day having that relationship. I look forward to that—I really do. I just want to be a soccer mom. I want to cook dinner every night. I want the kids to come home and be dirty and make the house messy. At the same time, I have to be patient and wait for the right time and the right guy. I would have never known that until I went through what I went through. I’m just patiently waiting for Prince Charming.

This connection is more than just words for Spears as she has befriended some of the cast members and was even featured in a previous article in which Chelsea Houska had planned a play date with her.

I have to say that I am impressed with Spears’ reflections and approach to her situation. I know that she had a fortunate financial situation that hardly anyone in this position has but all the money in the world can’t get your emotions straight and your mind focused.

We come across this argument all the time in regards to the Teen Moms with people frequently commenting about the money they get from MTV. The same applies here in regards to money not being able to buy you piece of mind and focus. It sure doesn’t hurt with the bills and the diapers and, and, and but… I’ve said it before and I’ll say it again here that I can’t imagine what it must be like to have been just a young girl who had this happen to them and then in a short period of time to become some of the most talked about and written about people in America. Could I handle that type of pressure as a kid while trying to raise a child? Could you? I honestly can’t say that I could.

If we’re to believe Jamie Lynn’s words from this great read it appears as if she’s figured out who she is within the identity of having been a teen mother and that she has a clear idea of where she’s heading. To catch up with Jamie’s burgeoning music career you can visit her official website here.