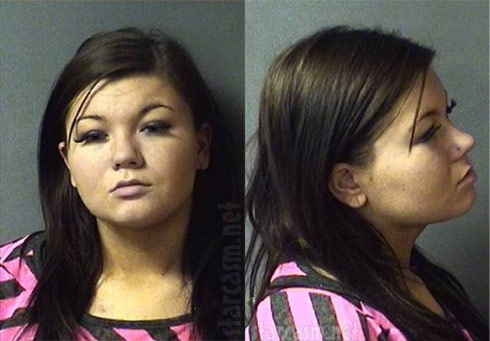 Teen Mom star Amber Portwood was arrested on December 19 for violating her probation, and according to a police report that surfaced online today, those probation violations included being in possession of a variety of prescription pills as well as failing to submit a urine test, as mandated by her probation.

Just as Amber Portwood’s brother Shawn Portwood said earlier this week, police went to Amber’s house after she failed to show up for a probation hearing and they found prescription pills in her purse that she could not prove were hers. Statements from Sgt. John Branson of the Anderson Police Department provide a little more information, including the fact that Amber seemed “very groggy” when officers arrived on the scene.

Sgt. Branson also says in his affidavit that officers found a variety of prescription pills together in a bottle and Amber could not produce a script for the majority of them. As explanation for why she didn’t have scripts for the pills, Amber told the officers at one point that “her housekeeper throws all that kind of stuff away.”

It was later determined that Amber’s pill bottle contained 32 Hydrocodone pills, 6 Soma pills, 2 of another muscle relaxer, 3 of a different kind of Hyrdocodone, and 1 unidentifiable pill.

The fact that they were all mixed together seems to suggest that it probably wasn’t some sort of mix up or misunderstanding as Shawn Portwood suggested in his post. He claimed Amber had some “old pills” in her possession that she no longer had a script for. That doesn’t seem to jibe with having a wide variety of prescription pills in a single bottle.

Amber is still set to face a judge on January 13. Things are not looking good.