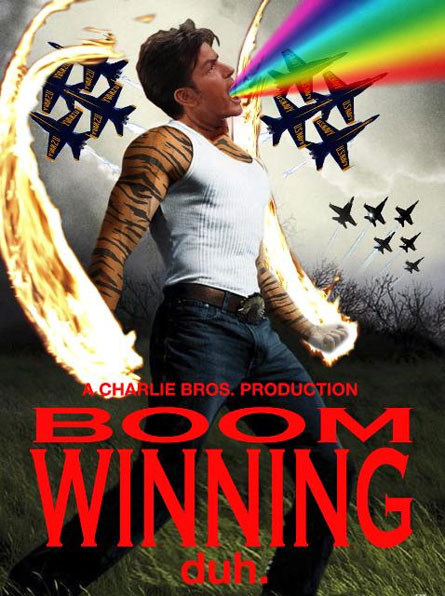 Charlie Sheen still claims that his interesting rants are just a big comedy routine, but honestly it’s very difficult to tell when the new polygamist Charlie Sheen is serious. Even at his best he sounds like a delusional narcissistic who genuinely believes that he’s on a higher plane than the rest of us. He might be right about that higher plane.

Charlie went the hospital with abdominal pain after a bender of alcohol, cocaine, and hookers, and refused to go to rehab. He was pretty quiet for a while while he rehabbed at home, but for the past few days he’s been ranting about how he had tiger blood to every news outlet he can (including this radio rant, and appearances on The Today Show and ABC News). His publicist quit today, saying that he can no longer effectively do his job.

20/20 taped an interview with Charlie when he was at his peak, which is airing tonight. Below are some of the most interesting quotes from that interview:

On people analyzing him as “bipolar” or manic-depressive:

I’m “Bi-winning” Thanks Dr. Loser. The Earth is bipolar.

On why people don’t get his sense of humor especially in regard to “crack is ok socially” remark:

When you’ve got a highly evolved brain, and you’re tryin’ to roll out your humor, that’s on me.

On if he’s proud of his partying:

Of course! Why wouldn’t I be.

On what he and his two goddess girlfriends do all day:

What don’t we do all day?

On if he is on any drugs:

Yes, I’m on a drug. It’s called Charlie Sheen. It’s not available, because if you try it you will die and your children will weep over your exploded body. Too much.

On how he drinks water:

I drink water through my eyes.

On why he’s doing all these interviews:

One day I woke up. I’ve been kicked around, I’ve been criticized, I’ve been this “Aww Shucks” guy with like this bitchin’ rock star life, and I’m just finally gonna completely embrace it, wrap both arms around it, and love it violently, and defend it violently through violent hatred.

On why he says strange words and makes no sense:

All these words just sound cool together. I comes from my grand wizard master. I don’t know, man. Stuff just comes out, and it’s entertaining and fun, and it sounds different that all the other garbage that people are spewing, you know?

How he survived after “bangin’ 7 grams rock [of cocaine] and finishin’ ’em, because that’s how I roll:”

On if he worries about death:

On the epicness of his parties:

The run I was on made Sinatra, Flynn, Jagger, Richards, all of them, just look like droopy-eyed, armless children.

On how his wild ride started from birth:

I was born dead. Hit on that one for a second. Yeah, the umbilical cord was like floppy baby, the whole thing, yeah it was bad. My dad was trying to bring Catholicism into the room, and the Dr.’s like “Shut that bible, get over here and do your job while I do mine.”

It was radical, he just beat the hell outta men, and finally this voice emerged and just said “I’m alive. Bring it.”

On what keeps him motivated to get up in the morning and stay sober:

Hello! *motions towards his two “goddesses” Rachel Oberlin and Natalie Kenly* My family. My beautiful, perfect, lovely family. It’s just, it’s just pure magic. I keep lookin’ around and I’m goin’ “Wow, not only do I deserve this, but it’s on!”

On if he worries about his kids:

I don’t have to worry about them. I just say “Hey,  kids, your dad’s a rock star. Look at his experiences. Look at what he survived.” Bang.There are some of your lessons, but the real lessons are gonna be in the future.

On what makes him a good dad:

On if he feels bad about trashing a hotel room on a particularly gnarly bender when his daughters with Denise Richards were in the next room:

I don’t know, you don’t really think about that in the middle of it. And then people remind you of it, and you’re like “Oh, Shame. Oops. Move on.” What are you gonna do? Like go change it? Go move their room? Can I go back in time and move their room? No.

On how ex-wife Denise Richards has been (who trashed him during their divorce, but more recently has deflected comments about his behavior) through his tabloid meltdowns:

On how his kids with Denise will deal with their dad being Charlie Sheen when they’re older:

They’ll wake up one day and realize how cool dad is, and he signs all the checks on the front and the back, and you know, we need his bitchiness.

The fun stops at one. That’s when they roll in, and they just puke all over it, and there’s no real gratitude. If they can’t change that, they’re not welcome in my perfect work environment. They’re not welcome to be in the presence of what I’m delivering, because they just need to take a step back and say “Wow, wow, look what this guy’s doing for us, for all of us.”

On if he was shocked when they shut down Two and a Half Men indefinitely:

Yeah. I was actually disappointed. Because I think the mistakes[sic] I made is that people misinterpret my passion for anger.

On if he’s broke:

No, I’m not. No. But I was kinda counting on some of that money to get me through the summer. Now I gotta like, work. But that’ s alright. Work’s good. Work fuels the soul.

On how much money he’s asking for in his suit against CBS for shutting down the show:

Tons. They’re actually gonna put it on a scale, I’ll be like “A little more, a little more, add some gold, all your toupees. Bingo!”

On how his passion is coming off as erratic:

You borrow my brain for 5 seconds, and be just like “Dude, can’t handle it. Unplug this b!stard.” Because it fires in a way that is maybe not from this particular terrestrial realm. When you have tiger blood Adonis DNA, man its like “Wheewww! Get with the program, dude. You’ve been given magic, you’ve been given gold.”

On what’s in the future for Charlie Sheen:

Just winning, every day. Defeat not an option. I don’t know. If the show doesn’t happen, movies.

On what life is:

I’ve decided that life exits completely with the moments inside the moments. That’s what a life is.

On what the most important thing is for him to life for:

Everything. All of it. I can’t specify one thing. Just bein’ known as a guy who wouldn’t bow down to the stupidy paradigms that people worship that are rooted in foolishness.

On if he fears death:

Oh, who isn’t. It’s the greatest trip, cause they save it for last. You know, deep. And it sucks that I have to do it too. But, I don’t know, heaven and hell, whatever, I just think it’s different dimensions, just walk through different doors. Who knows, I don’t know.

On what his tombstone will say:

“Something”.com, I don’t know what it is yet.