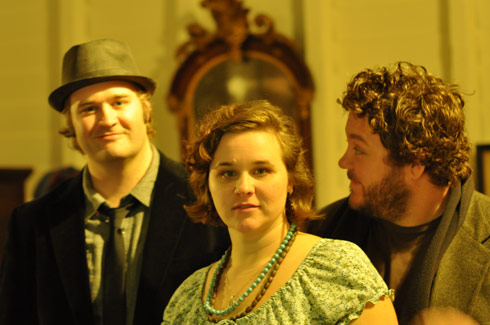 The wonderful indie film Once explores a transformative week in the life of an Irish busker portrayed by musician Glen Hansard.  During this week he meets an immigrant woman who partially inspires him to write and record a demo of original songs.  A pivotal scene in the film comes after the studio work and the musicians head out and about in Dublin, Ireland to see if the recording passes “the car test.”  It’s explained in the film that if you get in your ride and it sounds great coming through the car speakers then you got it right.

Having listened to The New 76ers debut release Superhighway I am reminded of that scene time and time again.  This album passes the car test with flying colors while summoning the trials and symbolism of the passages we must all ride upon during our own travels.

It sure does help to get the name of your album right and this three-piece acoustic band from Tallahassee, Florida couldn’t have been more accurate.  The songs on the album pulse and vibrate with the rhythms and symbolic freedoms of the highway.  It’s a theme that resurfaces throughout the album conjuring up a sense of motion and journey.  For instance, take this line from my personal favorite song from the record “After You” which is dedicated to a friend of the band, Barry:

“So when 300 miles seems a ways to go, when 80 seems way too slow to be sitting still watching the world go by.”

At this point a little band introduction is in order.  Kelly Goddard plays rhythm guitar and sings, Danny Goddard plays rhythm and lead guitar and sings, and Brian Durham plays bass and sings.  They all sing, and they sing well, especially together.  Now this is the south so the familial relations can get a little complicated but here it goes; Kelly and Danny are husband and wife while Kelly and Brian are siblings.  Best I can tell Danny and Brian’s relations are strictly above board.

In a recent interview with NPR Danny Goddard stated that the evolution of The New 76ers sound was bound to the power of the trio’s vocal harmonies.  It’s the band’s calling card so to speak and boy he ain’t joking.  One of the rare treats for me from this album is that it features alternating lead vocals on many songs and I actually like that fact.  This is almost always a turn off to my ears in terms of the glue an album needs to sound like a unit but with the vocals on this collection of songs it manages to enhance the cohesiveness.  The album is tight because the harmonies and the focus on the vocals are tight.

This “tightness” is on full display for “I Try To Sing Along.” Kelly Goddard takes lead vocals and reminds us of last night’s whiskey and trying to save a note but the regret is only palpable when the other two members join in for the chorus.

“She turns everything into a song and I try to sing along.”

I Try To Sing Along:

The theme of the record always comes back to that feeling of getting somewhere to me.  This journey brings about some perceived truths that the band holds to be pretty damn self evident.  Love, it seems, is the only master plan and the wind whispers:

Seven of the nine songs are originals with the two exceptions being the traditional “I Know You Rider” and Townes Van Zandt’s masterpiece “If I Needed You.”  These two covers are perhaps the finest examples of the band’s vocal harmony in work but the latter, this brave and bold turn at the often covered Van Zandt song is a very special recording.  What I was reminded of was Iris Dement’s cover of another Texan’s great song, which in her case was Lefty Frizzel’s “Mom and Dad’s Waltz” on My Life, a homage that fits right in with the themes and manifestations of that particular album.

The New 76ers version of “If I Needed You” is devastating and I had to come to grips with something after many repeated listens.  It’s the finest cover version of the song I’ve heard.  Now don’t throw virtual fruit at me folks, I know that’s an over-the-top statement especially when Emmylou Harris and Steve Earle {gulp} have made their runs at it but I had to be honest with myself and accept that it’s that good to my ears. 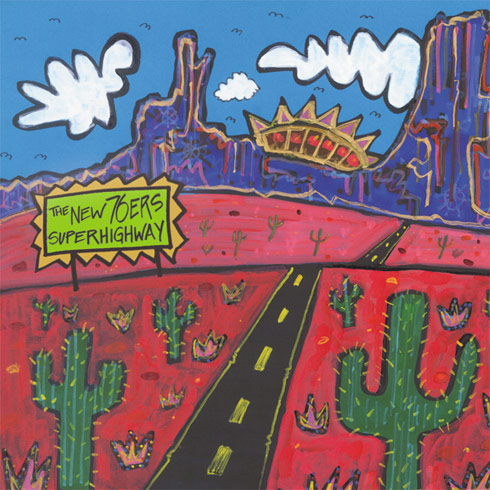 Superhighway is quite a debut, the songwriting is strong and focused, the musicianship is stand-out and the vocal harmonies demand attention.  What’s most exciting for me is that everything about the sound seems commercially viable.  This is soulful southern acoustic music that I could hear playing on the radio in a heartbeat.  After just one listen I knew Superhighway had passed the car test even if it did get a little tough driving from the tears in my eyes when “If I Needed You” hit me deep.

If you’re interested in picking up a copy of Superhighway you can head to the band’s virtual store here.  For all other The New 76ers situations check out their website acoustichappiness.com.